India vs England Video: Highlights from India's innings defeat to England at Lord's on Sunday which left them trailing the hosts 0-2 in the five-Test series.

England pacers James Anderson and Stuart Broad shared eight wickets before allrounder Chris Woakes completed a brilliant return to international duty with the final blow as England thrashed India by an innings and 159 runs in the second Test at Lord’s on Sunday.

The world’s top-ranked team India failed to cope with overcast and swing-friendly conditions in both their innings. They were dismissed for 130 having been skittled for just 107 in their first dig. Anderson, England’s all-time leading Test wicket-taker, finished with match figures of nine for for 23 as he became the first bowler to take 100 Test wickets at Lord’s.

The victory left England 2-0 up in the five-match series.

Allrounder Woakes’s 137 not out, his maiden Test century, was the cornerstone of England’s 396 for seven declared. Having bowled opener Murali Vijay for nought in the first innings, it was not long before Anderson had him caught behind for a second duck.

Vijay’s fellow opener KL Rahul fell for 10 to Anderson after playing across the line. After lunch, Rahane (13) was well caught by Keaton Jennings at third slip off Broad.

Rahane’s exit brought in Kohli, the world’s top-ranked batsman coming in at number five rather than his usual number four position because of a stiff back. Kohli, needing prolonged on-field treatment, fell for 17 when well caught by Ollie Pope at short leg off Broad. And the next ball saw Broad have Dinesh Karthik plumb lbw. Ravichandran Ashwin survived the hat-trick and went on to top score with 33 not out. 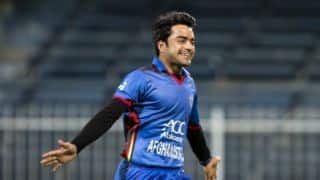