Adil Rashid enjoyed an eye-catching return to the side with 69 and four wickets.

Highlights from England‘s record-breaking win over New Zealand at Edgbaston where sparkling hundreds from Jos Buttler and Joe Root led the home side to a thumping win. Adil Rashid enjoyed an eye-catching return to the side with 69 and four wickets.

New Zealand‘s humiliation in the first One-Day International (ODI) against England, at Edgbaston was complete as they were bowled out for 198 in 31.1 overs. Chasing 409 for victory, they never really had a chance, especially after dangerous Brendon McCullum was dismissed in the very first over for 10 runs by Steven Finn.

Rashid played an excellent hand as well, getting his maiden ODI fifty in his seventh match. Chris Jordan and Rashid were out in the final over, but Liam Plunkett hit back-to-back sixes as England got their highest score in ODIs and also crossed the magical 400. 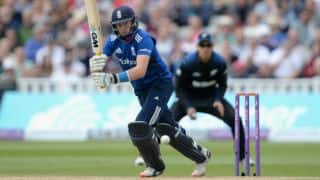