South Africa captain Hashim Amla said these were the “toughest conditions he had ever experienced” in his career.

Complimenting India for sealing the four-Test rubber with a 124-run victory on a spin-friendly track in the third Test, South Africa captain Hashim Amla said these were the “toughest conditions he had ever experienced” in his career. “Probably these are the toughest I have experienced in my Test career. The surface was probably the toughest I have had as well, and the cricket itself was really difficult. So credit to India, they kind of bowled well and unfortunately we ended up on the wrong side of this game,” said Amla at the post-match media conference, reports PTI. FULL CRICKET SCORECARD: India vs South Africa 2015, 3rd Test at Nagpur

Chasing a formidable target of 310, South Africa folded up for 185 and the game ended 52 minutes after tea on day three. Amla felt 200 would have been a gettable score in the last innings. “I would think chasing 200 would have been a more apt [target]. If I look at their first innings they were about 30 runs too much [if] our bowling was better, and even the second innings, I’ll be very honest with you, I don’t think it was a 220 first innings wicket and neither was it a 170 [wicket]. We could have got India out for 140 and that probably would have changed the complexion of the game,” he said to PTI. Hashim Amla credits Indian bowlers following South Africa’s loss in 3rd Test at Nagpur

India made 215 after tottering at 125 for six and then bowled out the visitors for a paltry 79, the lowest score made by any team in the country. Amla, who had a great record in earlier visits to the country, made the joint highest score of their second innings, 39, along with another out-of-form batsman Faf du Plessis. He pointed out that like the South Africans, even Indian batsmen have struggled in this Test series, reported PTI. 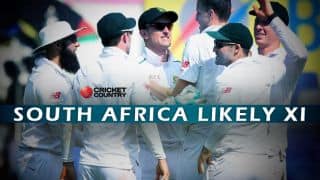