Younis remained unbeaten on 99 of 161 balls, scoring 14 boundaries in the process

Younis Khan remained unbeaten on 99 at the end of Day 1 of the tour match between Pakistan and Somerset at Country Ground, Tantum. Younis batted for a total of 161 balls and scored 14 boundaries in the process. He formed a 179-run stand with Asad Shafiq for the fifth wicket which helped his side end the day at 324 for 5. Wicketkeeper-batsman Sarfraz Ahmed was not out at 6 along with Younis at stumps. Earlier, Misbah-Ul-Haq won the toss and decided the visitors will bat first. This was the Pakistan’s first fixture under the new head coach Mickey Arthur. ALSO READ: Younis, Shafiq take PAK out of danger against SOM

Younis is arguably the senior-most member of this new looking Pakistan side. A veteran of 104 Tests, Younis paced his innings really well. His 99 runs came at a healthy strike rate of 61.49, as he combined boundaries with singles and doubles. The highlight of his innings were drives through the off-side, especially the cover drive.

After winning the toss and batting first, openers Mohammad Hafeez and Shan Masood got the visitors off to a good start, before the former was bowled by Paul van Meekeren for 22. Pakistan’s ODI side skipper Azhar Ali came in at No.3. After forming a good 56-run stand with Masood, Ali was caught by wicketkeeper Alex Barrow of van Meekeren’s bowling for 26.

With Younis at one end, things seemed to look steady, but two wickets fell in quick fashion, as the set Mas00d departed for 62, and he was followed by skipper Misbah, who was dismissed for 0. After that, Younis and Shafiq formed a brilliant partnership which took their side out of jail. Shafiq unfortunately was dismissed 80 just three overs before the end of play. At the end, Sarfraz and Younis saw out the remainder of the overs. 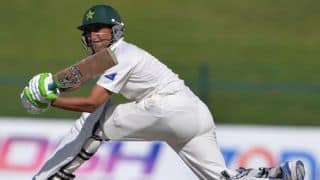