As the two overnight India batsmen Dinesh Karthik and Hardik Pandya entered the County ground on Day 2, they were welcomed by local bhangra dancers.

India were bowled out for 395 in their first innings on Thursday against Essex at the County Ground in Chelmsford. Ahead of the resumption of the day’s play, the two overnight India batsmen Dinesh Karthik and Hardik Pandya – found themselves surrounded by local bhangra dancers near the boundary as they received a traditional welcome.

Flanked by the performers on either sides, the duo walked out as the game recommenced on Day 2.

The two batters make their way to the ground with a traditional welcome by the locals.#ESSvIND pic.twitter.com/uqqPt9pOvl

The entrance might have been flashy for the pair but it wasn’t a rosy start to the day for the visitors after Dinesh Karthik ended up being dismissed off the very first ball of the day after being caught at the third man on 82. His partner though had a better outing as Pandya scored a half-century before being out on 51. Karun Nair lasted 12 deliveries before being cleaned up on 4.

Five India batsmen got to their fifties. For Essex, Paul Walter starred with the ball, picking up 4/113 from 21 overs. Matt Coles chipped in with two wickets while Matthew Quinn, Aaron Beard, Matt Dixon and Aron Nijjar took a wicket each. 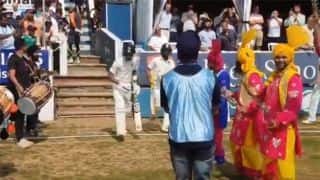