India completed a 4-0 win in the 5-match Test series against England recently.

The Indian cricket team and their support staff took the mannequin challenge after winning the fifth and final Test against England at Chennai by an innings and 75 runs. The mannequin challenge was first taken by the commentators such as Ravi Shastri, L Sivaramakrishnan, Michael Atherton and Ian Botham during the first Test at Rajkot. The concept was already an internet sensation, making the video go viral. From Virat Kohli to Manish Pandey, everybody featured in the video. The hashtag #MannequinChallenge is used with such videos on popular social media platforms such as Twitter and Instagram. In these videos, people remain motionless (just like mannequins).

The trend started surfacing with the students from Edward H White High School in Jacksonville (Florida) being the first reported group to do so when they came out with their video on October 26, 2016. Their work has since inspired many other groups, especially professional athletes around the world. As a result, Kohli and his Test brigade left no stone unturned to follow the trend. India still have a long home season ahead of them. They play a one-off Test against Bangladesh in March 2017, followed by a four-Test series against Australia. India have started off their home season on a high note after comprehensive wins over New Zealand and England.

India will now take on England in limited-overs fixtures, beginning from January 15. It will see MS Dhoni and Eoin Morgan returning to lead their respective sides. 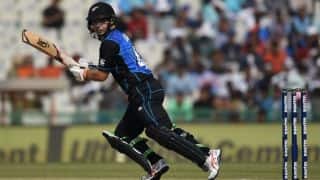