VIDEO: Kagiso Rabada tries out his hands in cooking

VIDEO: Kagiso Rabada tries out his hands in cooking

Watch J’Something cook his signature steak, egg and chips with South Africa speedster, Kagiso Rabada. He has also been named the ‘Newcomer of the Year’ at South Africa’s annual Sports Awards. Rabada, a pacer bowler, has shown his mettle in the ongoing tour of India after making his debut for the Proteas at the tender age of 19 last year. His One-Day International (ODI) debut came against Bangladesh at Mirpur where his figures of 6/16 were the world’s best ever by a debutant and the best ever for the Proteas, beating Makhaya Ntini’s 6/22 against Australia. Rabada was also only the second player to take a hat-trick on debut. He has since made his Test debut and has thus represented the Proteas in all three formats by the age of 20. Kagiso Rabada named ‘Newcomer of the Year’ at South Africa’s annual sports awards

“It is really heartening to see our significant investment in development (of previously disadvantaged Black players) producing winners. In particular, Kagiso Rabada is a standout talent and destined for greatness,” said Cricket South Africa (CSA) Chief Executive, Haroon Lorgat. “The success of our programmes is also reflected in the fact that we had several other finalist nominees including our World No. 1 Proteas Test team, the world’s best batsman, AB de Villiers, for the SA Sports Star of the Year, Shabnim Ismail in the SA Women’s Sports Star of the Year award, and Geoffrey Toyana as SA Coach of the Year,” he added. Virat Kohli becomes Kagiso Rabada’s 1st wicket on Day 1 of India vs South Africa 2015, 1st Test 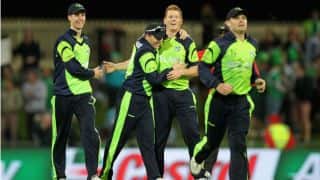 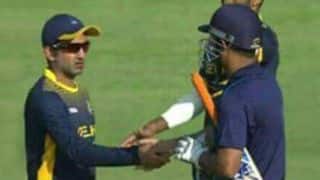