Mark Wood takes you inside the England camp in his exclusive From the horse's mouth video diary in the UAE.

Mark Wood takes you inside the England camp in his exclusive From the horse’s mouth video diary in the UAE. In this, the 4th episode, Woody takes you inside England’s football warm up. Who’s top of the scoring charts? Who is the best player? Woody, the ref, knows! Mark also talks about his resting from the third Test match and how gutted he is to miss out. His love for playing for his country and the pride he has to play at the highest level. However, England rested Wood for the third and final Test against Pakistan in Sharjah starting from Sunday as he recovers from an injured ankle. The 25-year-old from Durham was England’s best paceman in the 178-run loss against Pakistan in the second Test in Dubai, claiming five wickets in the match. The England and Wales Cricket Board confirmed on Friday that he would miss the final Test, saying that he needed to rest.  Reports suggested Wood would undergo surgery on the problem at some point, meaning he would face a lengthy layoff. Wood is likely to be replaced by Yorkshire seamer Liam Plunkett although allrounder Chris Jordan could also be in the picture. CRICKET SCORECARD: Pakistan vs England 2015, 3rd Test at Sharjah

Nottinghamshire all-rounder Samit Patel — who bowls left-arm spin — could also come into contention in case the England team management feel the Sharjah wicket will help spinners.  England will also drop wicket-keeper batsman Jos Butler to bring in middle-order batsman James Taylor for his first Test in three years. Jonny Bairstow will keep wicket in the absence of Butler. England to rest Mark Wood for 3rd Test vs Pakistan at Sharjah 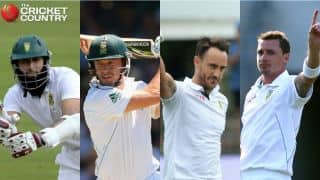 India vs South Africa 2015: Four members of visitors' squad to watch out for in upcoming Tests