In this video, Josh Hazlewood is answering questions relating to the tri-series and more at a press conference. When asked about the fitness of fast bowler Mitchell Johnson, Hazlewood informs the journalists that Johnson is set to return for the final of the tri-series at Perth. Johnson hasn’t featured in any of the games in the tri-series so far. In his absence Mitchell Starc has been prolific but Johnson remains an integral part of the Australian pace attack in One-Day Internationals (ODIs) and his return will further bolster the bowling attack which has struggled with the exception of Starc.

The tri-series is tantalisingly poised with India and England set to fight it out in a virtual semi-final at Perth. Australia steamrolled their way into the final with comprehensive victories over India and England in the first two matches before inching home against England in a game at Hobart and the match between India and Australia at Sydney was washed out. 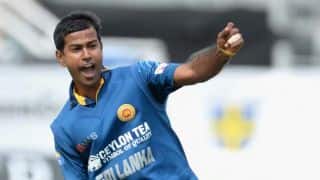