Watch: MS Dhoni walk in with a golden retriever in CSK dressing-room

Watch: MS Dhoni walk in with a golden retriever in CSK dressing-room

MS Dhoni's love for bikes and dogs are well known by cricketing fans all around.

MS Dhoni s love for motorcycles and dogs is unparalleled as known by cricketing fans all over. Apparently, during the match between Chennai Super Kings (CSK) and Royal Challengers Bangalore (RCB) in the VIVO Indian Premier League (IPL) 2018, Dhoni brought in a golden retriever in the home sides dressing-room at Maharashtra Cricket Association Stadium Pune. The following video of Dhoni walking with a dog was shared by CSK s official Twitter handle.

Dhoni was later seen strolling with the dog around the stadium as well.

CSK are currently placed second in IPL points table with 14 points. Dhoni’s form with the bat has been terrific. He is sitting on fifth position in race of Orange Cap with 360 runs. 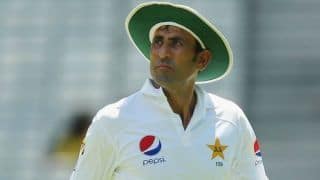