The modern day game has had its fair share of ill-tempered fights.

When two teams take the field and engage in a competitive sport, circumstances and testosterone together cause tempers to fray. Why should cricket, despite carrying the tag of being the gentleman’s game, be any different? Though cricket in the good old days rarely saw an angry skirmish, the modern day game has had its fair share of ill-tempered fights. While there have surely been many more confrontations on the cricket field than those mentioned here, these fights deserve to make the list due to the sheer amount of anger involved. Such an incident happened in a Big Bash League (BBL) game at MCG between Melbourne Stars and Melbourne Renegades, when Stars skipper, Shane Warne abused Marlon Samuels of Renegades for blocking his teammate David Hussey for a run in the previous innings. VIDEO: Shane Warne’s wonder ball to Andrew Strauss in Ashes 2005

Meanwhile, Warne rubbished rumours of coming out of retirement to captain the Melbourne Stars in the KFC Big Bash League. After the retirement of the legendary spinner, Michael Clarke had filled his shoes as Stars’ skipper. “I have no plans to come out of retirement & captain the Melb Stars. Flattered that people would like me too & glad you miss me playing,” he tweeted. However, after Clarke took a break from cricket for a year following his international retirement at the end of Ashes 2015, there were serious rumours had emerged about Warne filling the void created by Clarke’s absence. The rumours were strengthened following a tweet from the 46-year-old. “Hopefully will have some exciting cricket news for you this week,” he said. Unfortunate for Melbourne players and fans, Warne’s latest tweet has dismissed any hope about watching the cricketer in the T20 tournament. VIDEO: Hugh Jackman faces Shane Warne 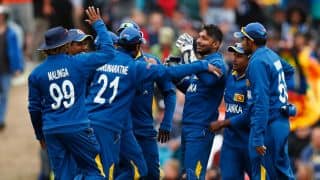 POLL: Is Sri Lanka the worst fielding team in Asia?