Steve Harmison was one of England’s main bowling weapons for the quest to reclaim the Ashes after 18 years. He took 17 wickets in the series at 32.29, but there are a few memorable moments that defined the intrigue of the series that stick to mind. One was his slower ball to get rid of Michael Clarke at the dying stages of the third day of the second Test at Edgbaston, and the other was the his bouncer to remove a defiant Michael Kasprowicz to clinch an astonishing two-run win on day five of the same Test. The bouncer was not his first-choice delivery on the final morning, he says, recollecting the nail-biting moments of the contest, as the final pair Brett Lee and Kasprowicz almost got Australia over the line. VIDEO: Ashes 2005 quartet remember historic series in interview with Michael Atherton

“That was the moment I thought, that was it (the visual of Brett Lee inside edging Harmison for four). There was a group of Australians probably five rows deep, they’re singing…101 to go…97 to go and they counted it all the way down. And I’m not sure who got more nervous — the 11 England cricketers, or the 100 Australians who were counting them down. Inside edge off Brett lee going for four and I’m thinking, that’s it, we’ve lost it.

“Simon Jones comes, and drops a catch. It was a tough chance. Simon was struggling at the time with his body, and it was a tough chance. We didn’t think it carried at the time. Brett Lee’s on strike, four runs to win. Michael Vaughan comes to me at mid-off. He said, ‘What are we going to do?’” Listen to the rest of his recollection in the video above. VIDEO: Steve Harmison relives Ashes memories 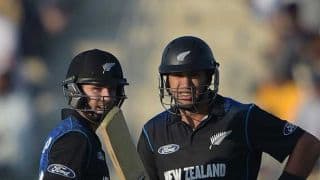