Stuart Broad registered his career best figures of eight for 15 in the 4th Ashes Test at Trent Bridge.

Stuart Broad took eight wickets as England skittled out Australia for 60 in a historically quick 111 balls on the first day of the fourth Ashes Test on Thursday. Fast-medium bowler Broad took eight for 15 in 9.3 overs as he smashed through the 300 test wicket mark in a scintillating performance at Trent Bridge. Broad said the performance had been “unbelievable”.Australia‘s innings was wrapped up in just 18.3 overs — the quickest any team has ever been bowled out in the first innings of a Test — during a stunning 94 minutes’ play. ALSO READ: Stuart Broad rips Australia apart as visitors are bundled out for 60 on Day 1, 4th Ashes 2015 Test

“It’s pretty unbelievable. It’s not sunk in,” Broad told Sky Sports during the innings break after drawing level with England great Fred Trueman’s career tally of 307 Test wickets. We knew Trent Bridge would offer us something but we had to bowl well and take our catches.” The 29-year-old Broad, leading the attack in the absence of the injured James Anderson — England’s all-time leading wicket-taker — needed just three balls in Thursday’s first over to take his 300th Test wicket when opener Chris Rogers, on nought, edged to Cook at first slip.  It was the first duck of Rogers’s 46-innings career in Test cricket. 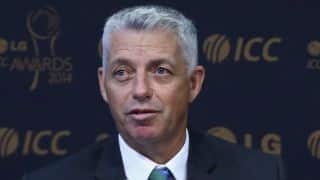