Bangladesh’s pacer Rubel Hossain dismissed Indian vice-captain Virat Kohli for 3 in the India vs Bangladesh quarter-final ICC Cricket World Cup 2015 match. Kohli was caught behind by Mushfiqur Rahim as the Indian tried to nick one of Rubel’s delivery. The ball edged and Mushfiqur took a clean catch as he stretched on his right to collect the ball. READ: Virat Kohli dismissed for 3 by Rubel Hossain against Bangladesh in quarter-final of ICC Cricket World Cup 2015

India lost Shikhar Dhawan and Kohli in quick succession as India struggled to cope with the concerted pressure put on them by Bangldesh’s bowlers. Dhawan was stumped for 30 when he didn’t manage to stay behind the crease and Kohli followed soon as he chased a ball outside the off stump. Live Updates: India vs Bangladesh

Rohit Sharma steadied the ship bringing up India’s 100 in the 26th over and later brought up his 26th half-century in the 28th over. While two-time champion Indians are familiar with the pressure of sudden-death World Cup cricket, this will be Bangladesh’s first quarter-final. The winner of this match will face either co-hosts Australia or Pakistan in the semi-finals on March 26 at the Sydney Cricket Ground. 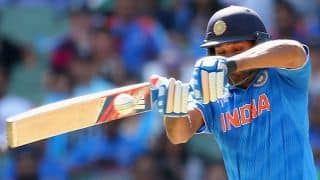 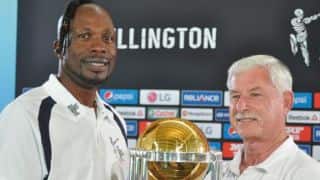