The century was smashed in 56 balls, with seven fours and seven sixes in Antigua.

Fifty six balls it took Viv Richards to score a century against England in the second innings of the fifth Test in Antigua in April, 1986. It was a stunning display of panache and precision, an innings that had Ian Botham smiling helplessly at the inability to do anything about the onslaught. Richards’ seven sixes in the innings did away with the issue of having all fielders on the boundary. West Indies, and Richards, were at the peak of their powers: after ‘black-washing’ England 5-0 in England in 1984, they defeated the same team in five Tests out of five in the Caribbean.

The home side took victory in that Test by 240 runs, thereby completing the sweep. They didn’t just defeat their opponents, but obliterated them: the first Test at Kingston, Jamaica, was won by ten wickets, the second, at Port of Spain, Trinidad, by seven wickets, the third, at Bridgetown, Barbados, by an innings and 30 runs, the fourth, at Port of Spain, by 10 wickets, before the final one, on the home ground of Richards. READ: Viv Richards plunders 322 in a single day’s play against Warwickshire

He still holds the record, but late October in 2014, Misbah-ul-Haq unleashed an attack against Australia in Abu Dhabi to equal it. That knock contributed to a 2-0 whitewash by Pakistan.

Adam Gilchrist was close to the record, reaching his century in 57 deliveries, against England in 2006-07. In a memorable moment from that series, he smashed three sixes and a four in an over from England’s left-arm spinner Monty Panesar. 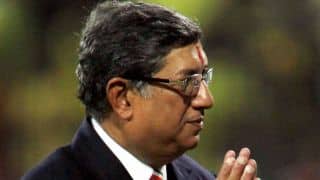 N Srinivasan storms out of interview!