Shahid Afridi came out of international retirement to lead the World XI after Eoin Morgan was ruled out with an injury.

The West Indies registered a comfortable win against the ICC World XI in a charity match at the Lord s. The match, held to raise funds for the refurbishment of five cricket stadiums in The Caribbean. The match was given T20 International status by ICC. Shahid Afridi came out of international retirement to lead the World XI after Eoin Morgan was ruled out with an injury. Afridi left the ground for one last time amidst tumultuous applause.

West Indies posted a total of 199 after being asked to bat. Chris Gayle (18) and Evis Lewis (58) added 75 for the first wicket; then contributions from Marlon Samuels (43), Denesh Ramdin (44*) and quick runs from Andre Russell (21*) took West Indies to a competitive total.

World XI then collapsed to 8 for 4 inside 5 overs overs. Every West Indian bowler except Ashley Nurse got wickets. Kesrick Williams was the highest wicket-taker with 3 for 42, which included the wicket of Thisara Perera. Thisara fought hard with 61 off 37 balls as wickets fell at the other end. West Indies bowled World XI out for 127 winning the match by 72 runs. 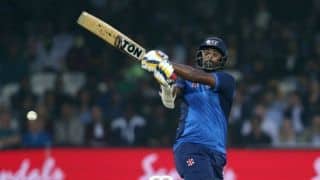 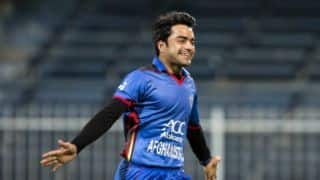