While Ashwin tried to speak in Punjabi, Harbhajan stepped into Ashwin's shoes to try and speak Tamil.

Team India players got their funny side up as two of the squad members for ICC World T20 2016 had a fun conversation that left their fans entertained. Prior to the second semi final against West Indies at Wankhede Stadium, Mumbai on Thursday, India spinners Ravichandran Ashwin and Harbhajan Singh tried a bit of role-reversal that tickled the funny bones of their fans. While Ashwin tried to speak in Punjabi, Harbhajan stepped into Ashwin’s shoes to try and speak Tamil. Ashwin has been one of the most important members of the playing XI for the recent matches for India but Harbhajan has not got any scope to play in any of the games so far. Full Cricket Scorecard: India vs West Indies, ICC World T20 2016, 2nd semi-final at Mumbai

India qualified for the World Twenty20 semi-finals and knocked out Australia after Virat Kohli smashed a brilliant unbeaten 82 in their do-or-die showdown in Mohali on Sunday. Kohli’s powerful 51-ball knock propelled India to a six-wicket victory, successfully chasing down Australia’s 160-6 total and keeping their World T20 title dreams alive. India now face the West Indies in a semi-final encounter in Mumbai on Thursday, despite the Caribbean side suffering their first loss at this tournament to underdogs Afghanistan earlier on Sunday. England play New Zealand in the other semi-final in New Delhi on Wednesday, before the final showdown at Kolkata’s Eden Garden on Sunday.

Board of Control for Cricket in India (BCCI) tweeted a video of the entertaining interview with the caption: ” Just for laughs – When @ashwinravi99 spoke Punjabi and @harbhajan_singh tried Tamil. Full video soon #IND” via their twitter handle. Here is the video:

India, who won the inaugural tournament in 2007, are gunning to become the first nation to clinch the title twice and the first ever on home soil. 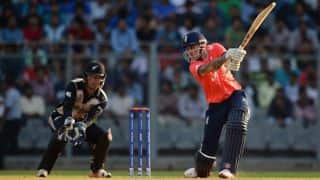