Virat Kohli dancing to the tunes of Prabhu Deva

Virat Kohli dancing to the tunes of Prabhu Deva
By

Indian vice-captain Virat Kohli was seen moving to the tunes of actor-director Prabhu Deva, when they got along like a house on fire in Bangkok, shooting for an ad together.

Earlier, there were rumours that they might even join hands for a movie.

Kohli, who was initially reluctant to dance, was coaxed by Prabhu Deva to try out some intricate steps for an ad for a shoe brand. The results were so impressive that somewhere down the fun zone the duo established during their two-day shoot, the idea of a movie launch for the star-cricketer came up.

Prabhu Deva is currently busy with the launch of Kumar Taurani's son Girish. He is working with him for a remake of his 2005 Telugu hit Nuvvostanante Nenoddantana. The original film featured Siddharth and Trisha Krishnan. 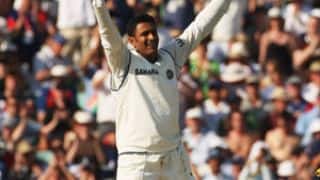