With India s one of the most famous festival coming soon Diwali, a series of gifting gifts has begun. In Indian cricket fraternity, this has started by former Indian cricketer VVS Laxman, who is currently quite busy in commentating during the ongoing One-Day International (ODI) series between India and New Zealand. Since retirement, Laxman has been among the famous commentators and ahead of India s holy festival Diwali, he decided to surprise Ravi Shastri with his secret gift. Shastri is known to be probably the most famous voice in Indian cricket. He was there when India lifted the inaugural ICC World T20 in 2007 and in ICC World Cup 2011. Full Cricket Scorecard, India vs New Zealand, 2nd ODI

Shastri s voice has been one of the iconic in commentary box, irrespective of what people says about it. One of his famous one-liner for a boundary during commentary is that went like a tracer bullet . Laxman seems to have inspired with that one-liner as he gifted something to Shastri which relates with that line. Shastri s reaction was quite interesting as his first word after seeing that gift was who sent this. Shastri also asked Laxman from where he got this idea. Laxman explained him by saying that it s his commentary from where he got this idea of gift.

Further, Laxman also gifted a kindle notebook to Shastri, as he likes reading. 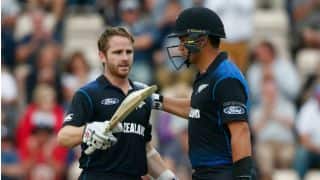