While the on-field affair of the opening day's play between India and England, 1st Test at Edgbaston turned out to be an engrossing affair, there was some off-field banter that kept viewers hooked to the proceedings.

While the on-field affair of the opening day’s play between India and England, 1st Test at Edgbaston turned out to be an engrossing affair, there was some off-field banter that kept viewers hooked to the proceedings.

Harbhajan Singh was in the commentary box along with former England batsman David Lloyd when it happened and the Indian offie was quick to pull Shastri’s leg, asking him cheekily to ‘Wake up’.

In a funny turn of events, almost on cue, Shatri opened his eyes right after Bhajji asked him to do so leaving everyone laughing. India batting coach Sanjay Bangar, who was sitting beside Shastri wearing an earpiece and listening to the commentary, also began smiling before handing the earpiece to his countryman.

Meanwhile, Indian cricket team enjoyed a fruitful opening day at Edgbaston with their bowlers, led by R Ashwin reducing England to 285/9 by the time stumps were drawn.

Ashwin finished with figures of 4/60 while Mohammed Shami took 2/64. For England, captain Joe Root top-scored with 80 off 156 deliveries followed by a brisk knock of 88-ball 70 from Jonny Bairstow. In fact, England’s collapse from 216/3 to 285/9 was triggered by some excellent fielding from India captain Virat Kohli whose direct hit caught Root short of the crease, sending him back.

Kohli’s mic-drop celebration after dismissing his England counterpart also made the headlines. It was an apparent riposte to Root’s similar celebration after leading England to a 2-1 win in the three-match series.

Watch the hilarious exchange below 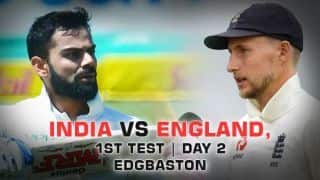