Hasan Ali is already renowned for his 'bomb celebration'. He took it a level further this time.

There is no stopping Hasan Ali these days. With 68 wickets from 33 matches, he is threatening to become the second-quickest to the 100-wicket mark in ODIs (the record is 52) — though Rashid Khan’s world record of 100 wickets in 44 ODIs may elude him. Hasan took 2 for 55 in the final ODI of the series between Pakistan and Zimbabwe, at Queens Sports Club, Bulawayo, where Pakistan completed their 5-0 whitewash.

The first of these wickets was of Zimbabwe captain Hamilton Masakadza, who demonstrated little footwork to a good-length delivery. The ball took off, eluded Masakadza’s outside edge, and sent both the off- and middle-stumps flying. It was a spectacular sight.

What followed was even more curious. Hasan is renowned for his ‘bomb celebration’, where he mimics the act of a bomb exploding, which had faced mixed reaction from social media.

Here, however, he went a step ahead and invited teammate Shadab Khan to celebrate on his behalf. Unfortunately, there was no Hasan Ali-level ferocity in the smiling teenager. 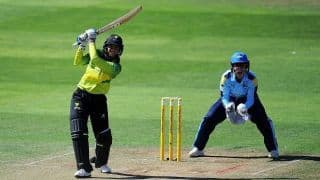