In the ongoing second Test between India and New Zealand at Eden Gardens, Kolkata, which is also their 250th match at home, Kiwi player Matt Henry took an excellent catch on Day 2. The second day of the match began with Wriddhiman Saha and Ravindra Jadeja at the crease with India 239 for 7. Saha batted very well with Jadeja at the other end as both added crucial 41 run for eighth wicket. Jadeja got out after scoring 14 but Saha continued to his batting with tail-enders.

Further, Bhuvneshwar Kumar also got out and by that time and then Saha completed his third fifty of his Test career from just 85 balls. India were nine down at 281 and New Zealand were eyeing to stop them under 300. Saha and Mohammed Shami ensure India s total of above 300. Shami scored 14, which included three boundaries. In the fifth ball of 105th over of India s batting, Shami hooked a bouncer by Trent Boult, which was quite well connected but Henry at fine-leg runs around his right and dives to catch it with his both hands while he was in the air. That can be surely said as catch of the match by Henry.

That catch ended India s first innings batting with the total of 316. All the Kiwi bowlers did good job with the ball. Henry grabbed three wickets while Boult, Neil Wagner and Jeetan Patel got two wickets each with Mitchell Santner taking only one wicket. 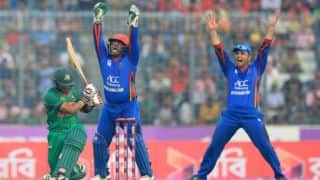