As shown in the recently released biopic on Dhoni s life, both these players were from the same era and played a lot of age-group cricket together in their younger days.

Mohammad Kaif and MS Dhoni both from the same age-group, both represent the new age Indian cricketers, who grew up playing in better conditions than their predecessors. While they were growing up, the infrastructure and the facilities at the stadiums were better than the earlier days. The grounds had a lush green cover of grass unlike in past, which allowed these young cricketers dive around the park and become better fielders. When they made natural progression to international cricket, it showed in their game, especially Kaif s, who set an example and a template for his successors to follow by becoming one of the finest fielders for India.

As shown in the recently released biopic on Dhoni s life, both these players were from the same era and played a lot of age-group cricket together in their younger days. While Kaif made it to the team first, Dhoni soon followed, and the two of them got to play for the country together for a couple of years. Both Dhoni and Kaif were extremely agile on the field and extraordinarily quick between the wickets. They had a penchant for converting ones into twos and taking a quick single where there was no run available.

However, in this segment, we will not talk about their running between the wickets. Let us take you through their act of combined brilliance to send back former South African captain Shaun Pollock to the pavilion during a One-Day International (ODI) between the two teams. The said game took place in Cape Town on November 26, 2006 as the third game of the bilateral ODI series between India and South Africa. India needed to win the game to make a comeback in the series and started quite well when they had restricted the hosts for 6 for 76. Pollock then added 60 runs for the seventh wicket with Justin Kemp and took the score to 136 when a Dhoni-Kaif act of brilliance sent him back.

On the fifth ball of the 36th over being bowled by Harbhajan Singh, Pollock gently played the ball towards short cover and took off for a single but Kemp promptly sent him back. Dhoni, the keeper, had by then swiftly moved across and reached to the ball. He gathered it and threw back towards the stumps, where Kaif was standing after moving from his position at short leg. Kaif stretched and dived across, collected the ball and hit the stumps, finding Pollock short of his ground by a fair distance. So confident was Kaif of the wicket that he almost single-handedly convinced the umpire to go upstairs. Out was the decision, a huge one in the context of the game as South Africa were reduced to 7 for 136.

However, as it turned out, Kemp went on to score an unbeaten hundred. It proved to be the last wicket India could get as Kemp along with Andrew Hall, took the final score to 7 for 274 in 50 overs. The two added unconquered 128 runs for the eighth wicket as Hall returned back not out on 56. In reply, India were bundled out for 168, losing the match by 106 runs. While Dhoni hammered a 48-ball 55, Kaif could only manage 10. India also went on to lose the series 4-0, with one match being abandoned.

The match also proved to be Kaif s penultimate ODI for India. He played the next game of the series and again scored 10. It proved to be the last ODI of his career as he was dropped after the series and never picked again. Dhoni, on the other hand, went on to become arguably India s greatest captain. 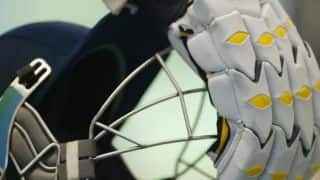