Zaheer had the rare ability to swing the ball both the ways and was dominating against left-handed batsmen.

Former Indian cricketer Zaheer Khan was a sensation to watch during his heydays. He steamed in and bowled with unmatched confidence and scripted numerous records. Zaheer had the rare ability to swing the ball both the ways and was dominating against left-handed batsmen. During the second Test against Pakistan at Faisalabad, Zaheer bowled a magical delivery to get rid of Inzamam-ul-Haq.

Inzamam was batting on 119 as Pakistan were 567 for the loss of eight wickets. Indian needed a wicket when Zaheer steamed in and bowled a beauty of a delivery, which pitched on off stump and moved away from the right-hander. The ball took a thin edge as it passed through Inzamam’s willow and MS Dhoni did the rest behind the stumps. Undoubtedly, one of the best wickets in the Test as it also gave India a breakthrough.

Massive runs were scored throughout the Test as it ended in a draw. Zaheer had seven scalps to his name in the Test. Relive the moment, where Zaheer gets the better of Inzamam with a beauty, here: 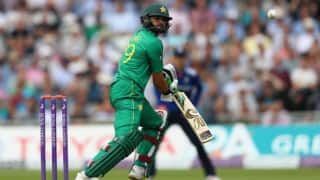