After Yusuf Pathan’s blitzkrieg innings to guide Kolkata Knight Riders to a massive win against Sunrisers Hyderabad on Saturday, the players returned back to their hotel, to celebrate with the star batsman.

Having watched with awe Yusuf Pathan‘s fireworks that enabled his side finish second in the round robin stage of the Indian Premier League (IPL), 2014, Kolkata Knight Riders captain Gautam Gambhir admitted that he had not see such an innings before.

Replying to the visitors 160 for seven, the hosts needed to overhaul the total within 15.2 overs, but thanks to Pathan’s blazing knock, they reached 161 for six in only 14.2 overs at the Eden Gardens.

“I have never seen this sort of innings in my career…unbelievable hitting… I can only dream of it, but I saw it in reality,” Gambhir said after the match.

“We always wanted to finish it in 15.2 overs, this is what we play cricket for,” said Gambhir, whose side will take on Kings XI Punjab in the first qualifier here May 27. 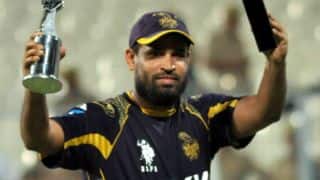