KS Duleepsinhji, born on June 13, 1905, was an Indian-born batsman who played 12 Tests for England.

KS Duleepsinhji, born on June 13, 1905, was an Indian-born batsman who played 12 Tests for England. Duleep was considered one of the finest batsmen of his time but had to give up playing due to health issues. Nishad Pai Vaidya picks 15 facts one must know about the legend from Saurashtra

Duleep was born in a Royal family of Saurashtra and was the nephew of KS Ranjitsinhji.

Ranji had a great career in England and it seemed obvious that Duleep would want to walk in his footsteps. He moved to England in the early 1920s as a teenager and first played for Cheltanham College in 1921.

In subsequent years, Duleep made a name for himself as a batsman. He also used to bowl good leg-spin. In his first game for Cheltanham, not only scored 76 but also recorded figures of seven for 35. Wisden s obituary noted that Duleep had taken 50 wickets during the 1922 season at an astonishing average of 13.66.

4. Playing for the Gentlemen

In the first half of the 20th century, there was this great divide between the amateurs and the professionals. Duleep played for the Gentlemen in a series of games against the Players in the year 1925.

Duleep became a regular in the Sussex team in the mid-1920s and served them with distinction until 1932. He went on to captain them in his last season i.e. 1932.

6. Highest score for Sussex in the county championship until Murray Goodwin

Duleep scored 333 against Northamptonshire in 1930. That innings took only 330 minutes and remained the highest score by a Sussex batsman in the championship before Murray Goodwin bettered it by two runs in 2003. Goodwin went on to better it again when he scored 344 not out in 2009.

Given his great domestic record, Duleep was selected in the England team in 1929 and went on to play 12 Tests. He scored 995 runs at an average of 58.52 with three tons and five fifties. Sadly, his career had to end due to an illness.

In 1932, India toured England, which featured it s first-ever Test. Duleep continued to play county cricket and even represented Sussex against India. He captained Sussex in that game at the Hove in 1932, scoring seven in his only innings, dismissed leg-before by Nazir Ali.

India s inaugural Test was imminent in 1932, but Duleep chose to stay in England and remain in contention for the 1932-33 tour to Australia. Ramachandra Guha notes in his book A Corner of a Foreign Field that both Duleep and Nawab of Pataudi senior did not turn up for India as they wanted to make the trip Down Under. Despite being named in the side, Duleep had to pull out of the tour due to an illness. The Nawab went on to play the Ashes, where he scored a ton on Test debut in Sydney.

In 1927, Duleep had missed out on many games during the summer due to an illness. A few years down the line, in 1932, he was hit by a pulmonary disease and was advised not to play cricket again. Thus, his career came to a close at the young age of 27.

11. Only two games in India

Duleep played only two representative matches on Indian soil. In 1928, he was a part of the Hindus team in the famous Bombay Pentangular, where teams were drawn on communal lines. Duleep played one game against the Parsees and scored 84 and 38. He played alongside DB Deodhar and CK Nayudu in that match.

12. Manhandled by the crowd for not picking Mushtaq Ali

In 1945, Duleep was a selector for the Indian team. The Australian Services XI were led by Lindsay Hassett on their tour to the Indian subcontinent that year. Mushtaq Ali, the aggressive Indian opener, had missed the first game due to an illness and was not selected for the second at Kolkata although he was fit. In the lead-up to the game, the fans protested and did not behave well with Duleep. Looking back at the incident, Mushtaq wrote in his autobiography Cricket Delightful: While I fully appreciate the love for my cricket which had incited the demonstrators to demand by inclusion in the Test team, I was really ashamed and extremely aggrieved at the way they behaved with that great cricketer and a fine gentleman [Duleep] too. Mushtaq eventually played the game.

In post-Independent India, Duleep went on to serve the government s foreign offices, leading diplomatic missions in Australia and New Zealand. He was also chosen to head the All India Sports Council. However, he died at the relatively young age of 54 in the year 1959.

The Duleep Trophy, instituted in his memory, is a regular feature in India s domestic calendar. It is contested between the different zones and is a First-Class event.

(Nishad Pai Vaidya is a Correspondent with cricketcountry.com and anchor for the site’s YouTube Channel. His Twitter handle is @nishad_45) 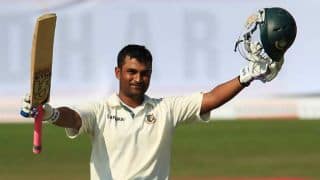 The Turbanator is back​!​