On October 13, 1987, England put up one of the worst displays of chasing a target under pressure after being well on course towards an emphatic victory against Pakistan at Rawalpindi in the Reliance World Cup. Aayush Puthran recounts the story of the match. 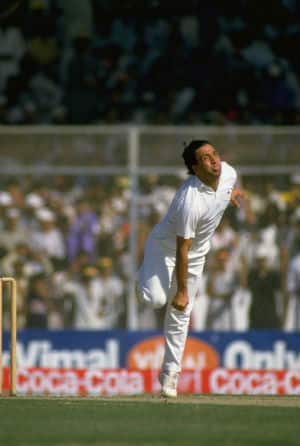 On October 13, 1987, England put up one of the worst displays of chasing a target under pressure after being well on course towards an emphatic victory against Pakistan at Rawalpindi in the Reliance World Cup. Aayush Puthran recounts the story of the match.


To snatch a victory from the jaws of defeat is an art, an attitude. And so is to lose from the brink of a win. The events at Rawalpindi on October 13, 1987, were a fine showcase of the latter, the artists of which would rather not remember their deeds.

With 34 runs required off the last four overs with six wickets in hand and Allan Lamb and Derek Pringle at the crease, the situation wasn’t as tough for England as the final scorecard read with them falling short by 18.

The events of the last four overs weren’t as much about the brilliance of Pakistan’s bowling or fielding, as much they were about the English batsmen’s frayed nerves.

In the fifth match of the 1987 Reliance World Cup, both the teams came into the game at the back of relatively closely fought encounters in their earlier matches.

Pakistan skipper Imran Khan played the match despite food poisoning. Winning the toss, England skipper Mike Gatting elected to field, hoping to exploit the early morning conditions at the Pindi Club Ground. No play was possible on scheduled day of the match as heavy rains had turned the outfield muddy. However, the pitch was in a good condition.

The next morning, on the reserve day, English seamers got to task and used the conditions to their benefit. Phil DeFreitas and Neil Foster used the swing to their advantage to trouble the openers. After a slow start, Mansoor Akhtar (six off 24 balls) edged the ball to the ‘keeper, while Rameez Raja (15 off 40 balls) was run-out by a brilliant throw by Chris Broad.

Saleem Malik, in company of Javed Miandad, stabilised the Pakistani innings. However, the English bowlers, combined with conditions aiding pace bowling, contained Pakistan to less than four runs in the first 30 overs. Both the batsmen were dismissed just when they were looking to accelerate.

Imran came out to bat despite his illness and added a crucial 79-run partnership with Ijaz Ahmed for the fifth wicket to revive Pakistan’s innings. Some late flourish by Saleem Yusuf ensured that the hosts had a decent score of 239 to defend.

It was a competitive score, given the bowling attack Pakistan boasted despite the fact that Imran couldn’t bowl.

However, despite a slow start, England were well on course for victory with enough wickets in hand for a late flourish. Graham Gooch and Chris Broad had set a strong foundation with a half-century stand for the opening wicket. Tim Robinson and skipper Gatting carried on from there to leave England well-placed for a win.

With four overs remaining, the match seemed well placed for an exciting finish. However, the game turned on its head in the 47th over. Abdul Qadir, bowling his last over, dismissed Lamb leg-before-wicket. The misery didn’t end there for England, as in a moment of nervousness, poor calling resulted in John Embury’s run-out before Qadir managed to find Paul Downton’s edge which was cleverly pouched by wicketkeeper Saleem Yousuf. England were reduced from 206 for four to 207 for seven.

With three overs remaining, they now needed 33 runs to win with three wickets in hand. More than putting England in a tight spot, there was a sense of panic which became evident with two more run-outs in quick succession.

The brief period of play of 16 balls towards the end of the match resulted in 15 runs and six wickets, leading to an 18-run defeat for England.

Qadir was duly awarded the Man of the Match for his four for 31 off 10 overs.

Man of the Match: Abdul Qadir