Prakash Govindasreenivasan lists the top 10 batsmen in Test Cricket in 2012:

The year 2012 has well and truly belonged to the Australian captain. After Ricky Ponting stepped down from captaincy, Clarke did well to take his side through transition with ease and has also excelled with the bat, in the process. He had a great start to 2012, scoring an unbeaten triple century against India and going on to beat Sir Donald Bradman’s record by scoring four 200-plus scores in a calendar year. His form away from home has been a bit of a concern but with the amount of runs he has amassed this year, he looks certain to overcome those hurdles. After Clarke, if there is anyone who has reveled under his own captaincy, its England’s Alastair Cook. Owing to England team’s weakness against spinners, many would have sympathized with Cook as he was handed leadership responsibilities ahead of a tour to India. What transpired in the four-match Test series has put Cook on par with some of the greatest cricketers from England. England registered their first series win in India in 28 years and to say that Cook ably guided them to this monumental achievement will be the most apt description of the series. Cook showed great positive intent throughout the series and batted superbly, scoring three big hundreds, to script a historic series win for his side. Earlier in the year, his partnership with Kevin Pietersen against Sri Lanka at Colombo helped England win the Test and level the two-match series. The 27-year-old England captain already has 21 Test centuries to his name and looks set for many more in the coming year. With four centuries this calendar year, Hashim Amla has been the go-to man for South Africa on any kind of surface. In a team like South Africa with a potent bowling attack, Amla fits in perfectly as he complements the endless hours put in by the bowlers, by going out and putting up big scores. His calm and serene approach to the game has made it very difficult for the opponents to find a way to unsettle him. In fact, on the Australian tour, the home side’s secret dossier for South Africa that got leaked in the media had a mention of a psychological approach to rile up the South African batsman. On current form, one could throw Amla on a minefield and he would still walk away with a classy knock. He has been the quintessential cog in the South African setup as they scaled new heights in Test cricket in 2012.
4. Kevin Pietersen The flambuoyant England batsman got involved in a controversy he could’ve easily avoided and yet has ended 2012 on a wonderful high. The year began for him with a match-winning unbeaten knock of 151 against Sri Lanka at Colombo and carried his form into the home series against West Indies. The turning point for the big man was the South African series, where in spite of a wonderful 149 in the final Test at Leeds, he was at the receiving end from the English Cricket Board for a breach of code of conduct. He spent time during the T20 World Cup as a charming ‘pundit’ and after a couple of apologies and clearly stating where his priorities and commitment truly was, he was re-integrated into the side for the tour of India. His knock of 186 in the first innings of the Mumbai Test will go down as one of the most devastating knocks of the year. He further played a crucial role in the remaining two Tests to head in for Christmas with a few memorable on-field performances. If he continues to play his counter-attacking style of cricket with such ease, he could go on to help his side beat Michael Clarke & Co. in their own backyard.
5. Jonathan Trott While most of us have been busy watching the likes of Michael Clarke and Kevin Pietersen dazzle the world with their run scoring ability, England’s Jonathan Trott’s efforts have almost gone unnoticed. Trott has two hundreds and six fifties in 2012 as he continued to play the role of what basket-ball players would term as a feeder. He held fort on numerous occasions as the likes of Pietersen and Cook went on to play a big innings. His best came in the final innings of the year against India at Nagpur, as his efforts on the final day of the Test ruined India’s plans of trying to level the Test series. He went on to score a big hundred in the innings to help his side secure a draw. In Trott, England have a batsman who can stay on the wicket for hours and put together some match-winning partnerships.
6. Shivnarine Chanderpaul Even at a time when the West Indian Test side is a mere a shadow of the team that played in the 70s and the 80s, there is one man who has refused to stop scoring runs at freewill. With an average of close to 100 in 2012, Shivnarine Chanderpaul has been a shrewd businessman, going about his duty of amassing runs irrespective of the happenings around him. He scored one century and four fifties in lost causes while his last two knocks of 203 not out and 150 not out came in victories against Bangladesh. With batsmen like Marlon Samuels giving him company in putting up good performances and Chirs Gayle getting accustomed to the longer format, Chanderpaul will hope that 2013 will bring more victories to his team before he eventually bows out of the game. South Africa’s Jacques Kallis has been the epitome of a fighter. Even today at the age of 37, Kallis wouldn’t think twice to give in a little more than 100 per cent in order to help his side achieve more and more success. Kallis had a great start to 2012, scoring a double ton in his first innings of the year against Sri Lanka. His best came against England at the Oval where he shared a 377-run partnership with Hashim Amla for the third wicket as the Proteas beat England by an innings and 12 runs. Despite being in the twilight of his career, Kallis has continued to be the backbone of the team. Suffering a hamstring injury in the second Test against Australia, Kallis walked out and almost played on one leg to support Faf du Plessis as they saved the game and eked out a draw. Although many would say that his retirement from the game is imminent, he has shown great commitment towards his team and barring any injuries, he looks set to play on for longer than anticipated.
8. Marlon Samuels After serving a two-year ban for match fixing, Marlon Samuels turned over a new leaf as he returned to international cricket in 2010. The man who made his Test debut against Australia in 2000, he earned his Test spot in 2011 and has been an important part of the team this year. While Chris Gayle has been at his devastating best in the shorter format of the game, Samuels has done well to score two tons and a massive double ton. He has worked extremely hard after his comeback and has reaped the rewards in 2012. Despite coming against Bangladesh, his knock of 260 has given some weight to the West Indian batting line-up. While the West Indian bowling attack is starting to get a good shape, with the likes of Kemar Roach and Tino Best doing well, the team will need Samuels to carry his good form into 2013 if they are to be taken seriously in Tests. 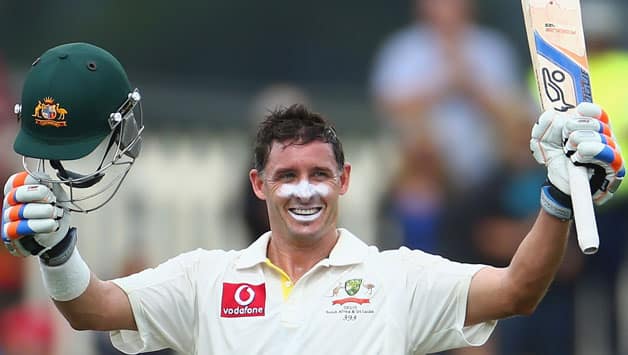 Michael Hussey’s 2012 began with an unbeaten knock of 150 against India at Sydney. He went on to score three more centuries in the year, proving that there was still a lot of Test cricket left in him. With Ricky Ponting announcing his retirement from Test cricket, the focus has now shifted to Hussey who turned 37 this year. But Australian cricket has never been about the age as it has been about consistency and performances and Hussey seems to be fully aware of that. He scored back-to-back hundreds against South Africa at home and carried his form to the Islands of Sri Lanka as he finished 2012 with an undefeated knock of 115. Even if Ashes 2013 turns out to be his last hurrah, Hussey looks set to leave the International stage on a high.
10. Graeme Smith South African Test captain Graeme Smith has had an eventful year. Besides taking his side to the pinnacle of ICC’s Test Rankings and holding firmly onto the title after a series win in Australia, Smith has made decent contributions with the bat. In the three-match series against New Zealand, Smith scored two half-centuries and one century as his side registered a 1-0 win over the Kiwis. Yet, his most crucial contribution came in his final Test of the year against Australia at Perth. After taking a slender first innings lead, Smith & Co. came out with a positive intent and scored runs at a brisk rate to earn a favourable result. With his 100-ball 84, Smith set the tone for the South African innings as they went on to win the game comprehensively.
(Prakash Govindasreenivasan is an Editorial consultant at CricketCountry and a sports fanatic, with a soft corner for cricket. After studying journalism for two years, came the first big high in his professional life – the opportunity to interview his hero Adam Gilchrist and talking about his magnificent 149 in the 2007 World Cup final. While not following cricket, he is busy rooting for Chelsea FC)

Preview: India and Pakistan to slug it out in first T20 match at Bangalore