Mickey Arthur and Michael Clarke are collaborating on their book on innovative concepts to win in India. The publication is set to hit the stands under the name "2013: A Pace Odyssey" by Arthur C. Clarke. Arunabha Sengupta reports. 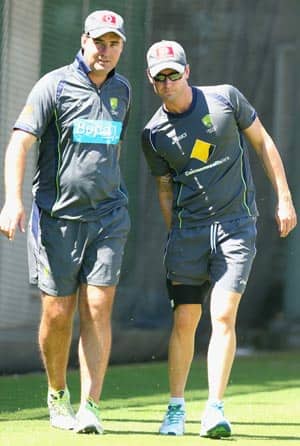 Mickey Arthur and Michael Clarke are collaborating on their book on innovative concepts to win in India. The publication is set to hit the stands under the name “2013: A Pace Odyssey” by Arthur C. Clarke. Arunabha Sengupta reports.

Those were the exact words uttered in chorus by the Australian coach and captain on casting their eyes on the Indian team list. The plan for the book was hatched then and there.

Mickey Arthur and Michael Clarke have documented their innovative approach towards planning and playing in India and are on the verge of publishing their work: 2013: A Pace Odyssey by Arthur C. Clarke.

“It was our breakthrough technique — to win in India with a pace attack. That’s why we used sophisticated methodologies to choose the team with some of the most atrocious spinners in the history of the game. We also worked towards the final objective by dropping the most experienced one after just one Test.”

From where did the ‘C’ crop up between the names of the co-authors?

“C stands for both ‘corporate’ and ‘cricket’,” clarified Arthur. “Our objective — as explained in the book — was to integrate the corporate best practices into cricket, with presentations, bullet points and pink slips. The bottom line was to go to India bowling with pace-makers …er, I mean, making it with pace bowlers.”

The Australian think-tank seems to have drawn on cutting edge scientific principles — including the Maxwell equation –to make pace the dominating factor of their attack.

But, won’t the initiative be shot in the foot with James Pattinson and Mitchell Johnson being asked to go home?

“Well the corporate best practices come with corporate policies. And it takes time. The 2001 —Original Odyssey was halted by VVS Laxman and Rahul Dravid. We will write sequels to this work across years until we arrive at the Final Odyssey,” Michael Clarke explained.

“But accountability is a must,” Arthur remarked when asked about the weirdest disciplinary action in the annals of the game. “It is Childhood’s End for the young players. As I said at that point of time, it is a line in the sand. We plan to elaborate on it in another book by our Arthur C. Clarke combination — Sands of Farce.”

When asked about the innovations, Clarke spoke at length about Test Match Algorithm 1 — TMA-1 in short.

“Look at Phil Hughes. People with short term vision are cutting him to shreds, criticising him for his low scores. However, that was a well-thought out role. To lay the foundation by scoring 1, 4, 9 and so on… in squares of whole numbers. And he came very close. You see the beauty of the strategy? Soon he would be scoring in torrents. By the time we move to the TMA-2 phase, we will have him scoring 225, 256, 289 in consecutive innings. It was this same approach that worked for me back home, when we were putting these principles to test.”

Arthur mentioned another cutting edge technique that had been one of their partial successes on the tour.
“It is informally known as take the mickey out of the openers. The official name is Hayden-Arthur-Langer method or HAL. The Indians pre-empted that to an extent by dropping Gautam Gambhir from the side, but we got Virender Sehwag.”

“We plan to collaborate on another book when we get to our goal,” the authors said. “We will call it Rendezvous with Yama by Arthur C. Clarke. Don’t smirk, when we win it will have a completely different meaning.”

When asked how they knew about Yama the co-authors smiled. “We know The Nine Billion Names of God.”

Clive Rice: Sachin Tendulkar should play until not a drop of juice is left in that orange