2013 Yearender: India on top of the world; yet long way to go

2013 Yearender: India on top of the world; yet long way to go

From the IPL controversy to a new generation, Indian cricket has come a long way in 2013.

The story of Indian cricket in 2013 unfolded in a dramatic fashion between May 16 and November 16; from the despair and hopeless feeling about the game of cricket to the dawn of a new promising era. Despite all the shameful spot-fixing scandal and the politics that unfolded, Indian cricket moved on and scripted a success story of its own. A historical moment was added towards the end when the world’s best batsman bid adieu to international cricket with his Test retirement.

Sachin Tendulkar’s retirement was the biggest moment not just for Indian cricket but for the entire world of sport. It was a day which everyone feared of — watching the game without a figure who has been there for 24 long years. Tendulkar’s retirement marked the beginning of a new chapter in Indian cricket. It all started with a tweet by BCCI on October 10 and the entire world of cricket was stunned. In the one month that he had, before the moment actually came, it was all about hype surrounding the Little Master. It was a fitting farewell with a victory and an emotional farewell speech which will be remembered for many years. There were many skeptics who felt that a young Indian team is most likely to falter in the absence of old warhorses.

By the time Tendulkar retired, the selectors had quietly shepherded a new team which was all set to take over the Tests after showing what they are capable of by taking the top spot in ICC ODI Ranking. The spot-fixing scandal though dented the image of India in world cricket. Amidst all that, Indian cricket scripted a sensational victory in the Champions Trophy 2013. Much of India’s success story was defined by the post Champions Trophy stage where a team emerged with a self-belief of winning in any conditions. Without sounding too exaggerated, India were well-prepared to fill up the exit of the Tendulkar, with all the Gen Next players Cheteshwar Pujara, Virat Kohli, Shikhar Dhawan, Rohit Sharma having considerable experience in at least one format of the game. Few years down the line, 2013 for Indian cricket will be remembered for the start of a new era.

The spot-fixing controversy damaged the credibility of the game to a great extent. Situation only worsened when the national board messed the entire situation by trying to cover up things. Perhaps it wouldn’t have unfolded in a similar way if the son-in-law of the board president, Gurunath Meiyappan wouldn’t have entangled himself in the issue. While we speak of the success story on one side, these embarrassing moments of 2013 can’t be covered by victories and performance of the national team. It is a serious stain on the credibility of the game and things can still go wrong moving into the next year if serious deterrent isn’t in place moving forward. If there was a verdict on whether the board was successful in taking action against the issue, the ratings might not be a pleasing sight.

Another aspect of the dark side was the autocratic ways the board used in its functioning and dealing with other countries. While India and South Africa played an excellent curtailed series, the treatment meted out to Cricket South Africa in dragging around and threatening to pull off from the tour isn’t a healthy sign for the way the game is administered.

With a 4-0 clean sweep in the Tests against Australia, wining six back-to-back ODI series including the Champions Trophy shows that it was a fruitful year for India on-field. There were plenty of positives to take from 2013. The Test series against Australia showed how dominant an Indian side can be even in the absence of senior players. The way in which they won most of the ODI series just kept on getting better. It reached a crescendo in the seven-match series against Australia where insurmountable targets were made to look like a cakewalk.

Successful Players of the year:

The long list of successful players this year is enough evidence to show the fine year India had.

Virat Kohli: He scripted sensational innings including the fastest Indian centurion in ODIs. However, the biggest moment he would cherish is starting the post-Tendulkar era with a ton batting at No. 4 on South Africa. Not only did he quell fears of India’s future in Tests, but reaffirmed his quality as the best player across formats for India. Kohli isn’t just a success story of 2013; a lot is yet to come in the years ahead.

Ravindra Jadeja: Backed by MS Dhoni, the all-rounder became India’s No. 1 all-rounder. Though he wasn’t among the runs, but his cameos helped India during the Champions Trophy. But his left-arm spin is what has foxed batsmen around the world. Jadeja isn’t the player opposition camps always think about while taking the field. And the all-rounder often has a surprise or two in store. Bagging over 50 wickets in ODIs in a year is no mean achievement. Towards the end of the year, he showed his ability even in overseas Tests with a six-for against South Africa.

Rohit Sharma: Talent has finally been converted into consistency. It was a dream year for Rohit. Ever since he was drafted as an opener with Shikhar Dhawan in the Champions Trophy the fortunes seemed to have changed dramatically. But the batsman looked equally determined to prove his worth. With back-to-back tons in his first two Tests, Rohit has made a timely entry into the scheme of things for India’s future across formats.

Mohammed Shami: It was not just a dream debut for the Bengal pacer but the skill he displayed in the process attracted more eyeballs. His pace, accuracy, skill to reverse the ball provided a new hope for India’s pace bowling future along with Bhuvneshwar Kumar who had his own success story to tell.

Cheteshwar Pujara: He is going to be India’s go-to batsman in tests and it will be a matter of time till he makes it to the 50-over format. With a double century at home and a good outing in South Africa, Pujara continues to be India’s new wall at No. 3.

Apart from them, there is Shikhar Dhawan with his sparkling Test debut; MS Dhoni continues to be the ever-reliable in limited overs, the rise of Ravichandran Ashwin as the No. 1 all-rounder in ICC Test rankings.

India’s tour to South Africa was just the start of the many challenges ahead. Though the result sheet will show a dismal performance by India, they won many hearts with the way they fought in the Test series. Pujara, Kohli, Ajinkya Rahane showed immense maturity in playing against the world’s best fast bowlers in their own den. The others failed to capitalise but did manage to take a bit of positives. A team which is reliant on batting, looks promising to keep the performance going after the exit of Sachin Tendulkar.

Though India lost to Pakistan at the start of the year and ended with a loss to South Africa, in between, they have made giant strides ahead which bring a lot of hope for the fans in 2014 with a World T20 and three overseas tours lined up. 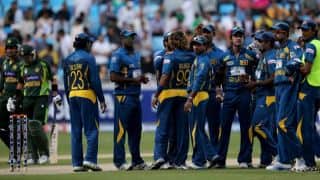