The dip that Sri Lankan cricket has seen is enormous when compared to their performance in 2014.

On the last day of 2015, Sri Lanka managed to record a consolation ODI win, one that would have reassured them of not everything going wrong in their brand of cricket. In time, the Sri Lankans can be back on track with better application.

Transition is a tough phase to go through, and Sri Lanka is no stranger to it. The only side to lose more Tests than them in 2015 is West Indies, the latter have truly been pathetic in their run, against whom Sri Lanka registered their only series win this year. The dip that Sri Lankan cricket has seen is enormous when compared to their performance in 2014. The side that lifted the ICC World T20 Trophy and followed it with a Test series win in England in 2014 are now driving recklessly towards doom, especially in Tests where they have dropped to the seventh position in the ICC rankings, bettering the likes of West Indies, Bangladesh and Zimbabwe in the table.

Kumar Sangakkara and Mahela Jayawardene retired from 20-over format after the ICC World T20 triumph in 2014, with Jayawardene retiring from Tests soon after. Sri Lanka made it to the quarter-finals of the ICC World Cup 2015 where they lost to South Africa (handing the latter their first ever knock out game win in the tournament’s history), which sadly marked the end of the Sanga-Mahela run. While Jayawardene’s international career had ended, Sangakkara had retired from international cricket. Five months later, after the second Test against India at P Sara Oval in Colombo, Sangakkara bid goodbye to international cricket. It is perhaps the void of bidding goodbye to beloved legend, arguably the greatest batsman of the 21st century, that has hurt the Lankans and affected them psychologically.

Sri Lanka played 11 Tests in 2015, winning four and losing seven. The year started for them in New Zealand with a series defeat and ended at the same place with similar result. The Wellington Test in January was a classic, and if Sanga’s master-class 202 set it up for the visitors, Kane Williamson, who later went on to make the year his own, charged New Zealand with a second innings 242 not out, helping his side record a 2-0 series win.

Sri Lanka did not play another Test till June, when they hosted Pakistan in a closely-fought three-Test series. The series was level 1-1, and Sri Lanka had the upper hand till the fourth innings of the final Test at Pallekele. Younis Khan however, stole the show to propel the visitors to an unexpected triumph. Led by his unbeaten 171, Pakistan chased down a record 378 and made it look pretty comfortable.

Then arrived the Indians and Sri Lankan batting looked in doldrums. Sangakkara being outfoxed by Ravichandran Ashwin in all four innings of the first two Tests seemed to have dented the Lankan forces mentally. The hosts won in Galle, courtesy a Dinesh Chandimal classic (162 not out) and warhorse Rangana Herath’s seven-for. Had a few umpiring decisions gone the right way and India applied themselves a little more in the second innings, the series score line in the end could have read 3-0. Nevertheless, India bounced back in both the Colombo Tests, ruining Sangakkara’s farewell and winning a Test series in the island-nation after 22-long years. It was a young and relatively inexperienced Indian side led by a new captain Virat Kohli that won in Sri Lanka. Both teams were going through a more or less similar phase but Indians applied themselves better.

Finally some relief for the Lankans,  as the West Indians arrived on their shores, and were expectedly demolished at Galle. However, the Caribbean side put up a fight in the second Test at P Sara Oval. The game swung like pendulum till the end before the hosts sealed it by 72 runs.

Now to New Zealand and the score line again read 0-2. It was not that New Zealand were unbeatable, as the closely-fought second Test would prove. Conditions were not conducive to batting, but Lankans still put up a brave show in the first innings. After a 55-run first innings lead and cruising at 71 for no loss in the second innings, Sri Lanka gave it away. Now that is the reason I have used ‘reckless’ time and again. They just added another 62 runs in almost 14 overs and lost all 10 batsmen, falling prey to New Zealand’s short-ball strategy. The batsmen did not learn and did not display any grit or application. Sad case indeed.

A circle was completed for Sri Lanka this year as another Williamson classic (108 not out) stood between them and victory, much like their first Test, much like their first match of the year at Wellington. Losing all 10 wickets in less than a span of 14 overs is where they ultimately lost what would be their last five-day encounter.

It was Sangakkara and Angelo Mathews who led the Test batting charts in 2014. The Sri Lankan batsmen did not have that impact this time around. However, captain Mathews once again was consistent, although he did not receive the kind of support that he should have. He ended the year with 845 runs at 42.25, although his average was close to 88 in the year before.

Sri Lanka’s highest run-getter in 2015 was Dinesh Chandimal. The wicketkeeper-batsman took his game to next level and did justice to the hype around him. Often compared to Sangakkara, he ended the year with 901 runs at 47.42. Dimuth Karunaratne has shown promise but Sri Lanka needs him to be more consistent at the top.

With 60 wickets, Rangana Herath was the highest wicket-taker in 2014; in 2015 he ended at 10th spot with 37 wickets. The year saw the rise of Dhammika Prasad as the leader of the pack. The 32-year-old pacer finished with 41 scalps at 24.95. He bowled his heart out, used his variations smartly and frequently came up with some unplayable deliveries.

Lahiru Thirimanne’s show at Test level has been a matter of concern. The southpaw, rated very highly by most, has failed to make use of the numerous opportunities. An average of less than 25 in 23 Tests cuts a sorry picture indeed.

The world had just begun describing Kusal Perara as the next Sanath Jayasuriya when the 25-year-old failed the dope-test ahead of the New Zealand tour. His batting has an uncanny similarity to Jayasuriya’s and apart from having a good Test debut, he also was coming of age in ODIs. He averaged 42 in 2015 at a strike-rate of over 114. Now he faces a four-year ban.

Despite some spectacular individual shows, Sri Lanka did not function very well in ODIs as a unit. They are at the fifth spot in the ICC ODI rankings, and barring the home series against West Indies, they lost in all the ones they played. The year started with a 4-2 loss in New Zealand, and though Sangakkara lit up the ICC Cricket World Cup 2015 with four consecutive hundreds, the runners-up of 2011 failed to cross the quarter-final barrier.

There were some awe-inspiring individual efforts from the likes of Sangakkara, Jayawardene, Chandimal, Tillakaratne Dilshan, Lahiru Thirimanne, etc. and Sri Lanka maintained a 50 percent win-loss record, winning 12 and losing as many.

They lost to Pakistan 3-2 and later beat West Indies 3-0. Currently, playing in New Zealand they trail the five-match series 1-2.

The bit of success that Lanka has found in ODIs can be credited to warhorse Dilshan, who continues to impress at 39. He ended the year in the third position in run tally, with 1,207 runs at 52.47, and they have come at a strike-rate of almost 91. Add 12 wickets to that, and the impact multiplies. In stark contrast to his Test form, Thirimanne was good in ODIs. In times to come, a lot will depend on him.

Sri Lanka will enter the ICC World T20 competition in March as the defending champions. They are the No.1 side in this format but in 2015, they played four matches, losing three of them. A 0-2 loss in hands of Pakistan followed by a 1-1 stalemate against West Indies, Sri Lanka have also failed to dominate the format they have excelled the most and now face a daunting task defending the World T20 title.

Dilshan won’t be with them forever and with Kusal facing a ban, signs aren’t good. In Mathews, Chandimal and Thirmanne, Lanka do have the crux for future. It is now time for the younger lot to step up, and step out from the Mahela-Sanga-Dilshan shadow. 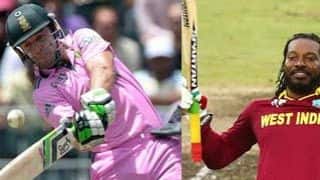