Here is a list of top 10 Test moments of the Year.

As this year comes to an end, we take a look at the top moments from most complete form of cricket, Test cricket. The year 2015 had its share of historic, amusing, dramatic and scandalous flashes from all around the world. Vishal Mehra lists down the Top 10 Test moments of the Year.

1. Day-night Test cricket: The whole world waited with patience breathe the arrival of pink ball cricket, there was no doubt that it literally stole the thunder away, with type of match being played out. With the picturesque Adelaide Oval all beaming bright under lights, sky with its perfect pitch black self, it was a magnificent sight for all players and audience worldwide to feast there on.

2. Ishant Sharma–Dhammika Prasad chase: The 3rd and final Test between India and Sri Lanka, is infamous for the Ishant–Dhammika spat. It so happened that after the end of India’s second innings. Ishant sprinted towards the dressing room, in order to get changed and ready to return for bowling. What conspired next caught everyone for surprise: Dhammika followed him in what looked like a full Usain Bolt sprint and lead to them facing off on the staircase. Prior to all this Ishant and Dhammika had an mid-pitch verbal altercation.

3. Steven Smith 215 vs England at Lords: There was a lot of talk in the media that Steven Smith is not comfortable against swinging and seaming conditions in England, prior to the Ashes. Smith, having had a good home series against India, would have liked to make a statement and prove his detractors wrong. Smith crushed all doubts over his technique with a maiden double century at Lord’s in the second Test. At Lord’s, where the names of Ricky Ponting and Sachin Tendulkar are missing from the honours board, Smith found a perfect place and time to make his critics eat their own words.

4. Stuart Broad 8 for 15 vs Australia at Trent Bridge: Stuart Broad wreaked havoc against arch-rivals Australia at Trent Bridge on Day 1 of the fourth Ashes Test, achieving career-best figures of 8 for 15. It was a delight to see classic exhibition of swing and seam bowling, Broad in this process also picked up his 300th Test scalp in Chris Rogers for duck. Nothing better than seeing batsmen swivel and get completely outplayed by the bowler in the era of easy batting and hard bowling.

5. Ben Stokes vs New Zealand at Lord’s: Before the Steven Smith chronicles, it was Ben Stokes time to play the entertainer at the Mecca of cricket. Stokes bludgeoned his way into the record books, making the fastest-ever hundred at Lord’s. Stokes 100 came of just 85 balls. Not the one to shy away from showing off his tattoos, Stokes made good use of his characteristic and did prove to everyone why he is a cricket box office star.

6. Ravindra Jadeja out bowled Hashim Amla: Ravindra Jadeja who had just made a comeback in the Indian Test squad made a complete mockery of Hashim Amla in the first Test at Mohali. Amla, who came into to bat with South Africa 9 for 2, was bowled to straight one from Jadeja. Funny part was that Amla, looked to be in no hurry what so ever to protect his wicket. Amla left the ball alone and it went straight in to the middle stump. A batsman of Amla’s calibre shouldn’t be laughed at, by but that brain-freeze from one of the premier batsman in the world was indeed shocking.

Pretty sure the great @amlahash is going to be embarrassed at this dismissal. #ComeOnIndia pic.twitter.com/WzPSG4zG6L

7. Nigel Llong vs DRS at Adelaide: The day-night Test at Adelaide, Day 3 gave us one of the most controversial moment of the year as Nigel Llong made a horrifying decision. The debutant Mitchell Santner picked up on Nathan Lyon tried and to sweep off middle stump. The ball took a feather edge on its way to slip. The on-field umpire gave it not out, after being reviewed itwas clear that Hot Spot showed a nick, with even Lyon himself started walking. Everyone, but the man in power; third umpire Nigel Llong ruled it not out.

8. Yasir Shah spell vs Sri Lanka at Galle: Leg-spinner Yasir Shah grabbed a career-best 7 for 76 as Sri Lanka collapsed losing final 5 wickets for 39 runs. Shah showed complete control on the ball, show-casing a master class of art of leg spin. This prompted the great Shane Warne to compliment and admire Shah’s style of leggies. Yasir carried on his brilliant form through-out the year spinning Pakistan to victory against England in second Test at Dubai.

9. Kane Williamson vs England at Headingley: The No. 1 Test batman in world, being an unlikely hero for his team as a bowler, doesn’t it sound weird? Yes Kane Williamson has the distinguishable honour of leading New Zealand to a memorable victory against England with his off-spin bowling. Williamson, who was once suspended for bowling took 3 for 15, including the prized wicket of Alastair Cook as Black Caps won a Test on English soil after 16-long years.

10. Mitchell Starc’s 160+ spell vs New Zealand at Perth: Nothing better than watching a fast bowler breaching the magical 160+ kmph mark along with fiery spell. Starc achieved everything above on Day 3 of the second Test between Australia and New Zealand. Single-headedly, Starc made the pitch come alive with ferocious bowling with every single delivery looking like a wicket-taking one. He did manage to bowl a 160 + delivery, allowing him to officially enter the 160+ group. 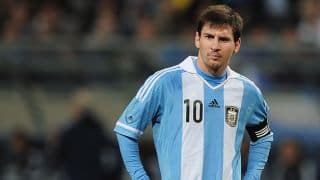