Much like the men s side, South Africa women also suffered from the fear of finals.

Much like the men s side, South Africa women also suffer from the fear of finals. The past year had two such moments that reminded us how dreaded fortunes go hand-in hand-for South African cricket teams. Packed with experience and youngsters, South Africa visited Bangladesh for 5-ODI tour.

Year begins on a high –

South Africa started the tour with back-to-back win against the home side that set the tone for the remaining matches.

In a low scoring third ODI, Bangladesh was scuttled out for 136. South Africa in reply were complacent and failed miserably with the bat. It was Khadija Tul Kubra, who spun a web around South Africa’s strong batting line-up to hand Bangladesh a 10-run win.

Stunned by a shock defeat, South Africa came back into their own in the fourth and fifth ODIs, winning them comfortably by a margin of 93 runs and 8 wickets respectively.

The series helped South Africa gain much confidence as they marched to Sri Lanka in a bid to qualify for ICC Women s World Cup.

So near yet so far –

South Africa were placed in Group B alongside Pakistan, Bangladesh, Scotland and Papua New Guinea Women. They notched up healthy win against all side and remained table toppers with 8 points.

Chloe Tryon, Marizanne Kapp, Shabnim Ismail and Dane van Niekerk starred for them heading into the Super Sixes stage where they were confronted by India and Sri Lanka as well.

South Africa suffered their first defeat in the hands of India. Chasing a target of 206, Indian women were all over their opponents with Shikha Pandey and Ekta Bisht tormenting them. Despite some handy knocks by Trisha Chetty and Marizanne, South Africa could not avoid a 49-run loss.

South Africa avenged their defeat on Sri Lanka. They mauled them by 9 wickets with Laura Wolvardt and Sune Luus running riot; both remained unbeaten on 50s.

Ireland were no match for the women from South Africa. Laura yet again shined with the bat, and guided her side to a 36-run victory (DLS method).

In finals of the qualifiers, South Africa took on India with an aim to seek their Super Sixes defeat. Batting first, South Africa top-order smacked India’s bowling all across the ground and ended scoring 244 runs.

India in reply, started well with Mona Meshram and Deepti Sharma adding 124 runs for the fourth wicket. It was then Marizanne who came into her own and rattled a strong middle-order.

Her job was carried forward by Ayabonga Khaka, who scalped two quick wickets and their opponent on the mat. It was Harmanpreet Kaur that scored a run-a-ball 41 that edged India to a 1 wicket win off the last ball.

South Africa took on India, Ireland and Zimbabwe in a quadrangular series at home. The first match against Zimbabwe was a cake-walk for the hosts, who won by 8 wickets. In the second match, they met familiar opponents in India and lost by 7 wickets. As expected, South Africa routed the likes of Ireland and Zimbabwe in the next matches. In ninth match of the series, they met India again.

This time the script was different as they came out victorious. More than South Africa s brilliance it was India s poor batting that was a fault in their win. India came back to avenge their defeat in handsome fashion, beating South Africa by 8 wickets to clinch their second successive final win over them.

The quadrangular threw out some upcoming stars for South Africa. Players like Laura, Andrie Steyn, Shabnim Ismail and Sune Luus gained much needed confidence and form heading into the World Cup.

The stairway to heartbreak –

South Africa started their campaign with hard-fought 3 wicket win over Pakistan. They were cruising to a win but pressure almost saw them out of the same until Shabnim Ismail helped them cross the line. Their second match was abandoned due to incessant rains against New Zealand.

Inspired by Dane, South Africa thumped past West Indies by 10 wickets and faced tournament favourites England. The target of 374 proved to be too much for the visitors.

Laura, Lizelle Lee, Chloe Tryon and Mignon du Preez did put up a valiant effort in batting helping their side cross the 300-run mark but could not prevent a 68-run defeat. South Africa, once again, faced India and humiliated them for earlier defeats.

Asked to chase down a mammoth 274, Indian team felt flat on their faces and were handed a 115-run loss, thanks to Dane 4 for 22.

In a match that could have decided who South Africa face in the semi-finals, they were defeated by 59 runs. With 9 points in hands, South Africa were pitted against England in semi-final 1.

South Africa spirited on occasion on Nelson Mandela Day, took on England in one of the most closely fought semi-finals in the history of Women s World Cup. Laura and Mignon slammed 66 and 76 runs respectively to set Heather Knight s women a target of 219.

Heather in alliance with Sarah Taylor kept England in hunt despite losing early wickets. The pair looked good to but a run-out and few back-to-back wickets kept hopes alive for the visitors.

It was not until Jenny Gunn, who smacked a run-a-ball 27 that helped England nudge past South Africa by 3 wickets. In a reminiscence of the men’s semi-final defeat from World Cup 2015, South Africa women players also sat on the field and started weeping in disappointment and sadness.

The New Year will once again bring in challenges for South Africa as they travel to the land of heartbreak and take on England in a 3-ODI series. ODIs will be followed by a tri-nation T20I series involving New Zealand as well.

Given the exposure young players had during the World Cup, this series is bound to be an exciting affair. 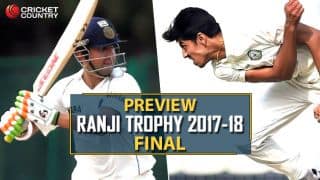