Asghar Afghan has been stripped of Afghanistan captaincy across formats.

In a sudden turn of events, the Afghanistan Cricket Board on Friday removed veteran Asghar Afghan from his duties as Afghanistan captain across formats and announced three new captains.

This is the first leadership role for Naib, 28, who now has the task of leading Afghanistan at the 2019 ICC Cricket World Cup.

Asghar was made captain in 2015, replacing Mohammad Naib. Under Afghan, Afghanistan won 16 of 26 ODIs and 23 of 27 T20Is. He led them in their debut Test last year against India and last month oversaw Afghanistan’s maiden Test win over Ireland in Dehradun.

Before the World Cup starts on May 30, Afghanistan play ODIs against Scotland, Ireland, Pakistan and England. They open their World Cup against Australia on June 1.

Pakistan‘s chief selector Inzamam-ul-Haq has not called the trio of Wahab Riaz, Umar Akmal and Ahmed Shehzad for the final fitness tests being conducted in Lahore before the April 23 deadline to submit World Cup squads.

The three names were missing from the list of 23 probables for the two-day camp on April 15 and 16 at the National Cricket Academy.

Recalled last month for the first time since he was sent home from England in 2017, Akmal, 28, played all five ODIs against Australia and made 48, 16, 36, 7 and 43. However, on Sunday he was fined 20 per cent of his match fee and given an official reprimand after breaking team curfew ahead of the fifth ODI between Pakistan and Australia in Dubai.

The batsman Shehzad played the last of his 81 ODIs in October 2017. 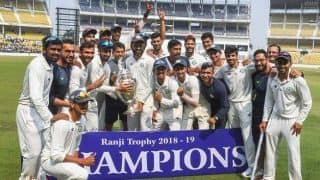