Pandya fits the bill as the fifth bowler who can bat and fill in as the third seamer.

We are all quite aware of the Hardik Pandya and KL Rahul episode and we all have our views and opinions. I hope this gets sorted out early as both are part of the ODI set-up and this situation can affect India s 2019 ICC Cricket World Cup plans.

Rahul, one might argue, has had a miserable run with the bat in Tests and is not a certainty in India’s ODI XI. But while he might have had a forgettable run with the red ball, he’s been very good in the limited-overs format, whenever he’s got an opportunity. As of now, he might be the back-up opener and looking at Shikhar Dhawan’s scores in the last few series, you would want your back-up opener to be ready. While the search for the No 4 batsman is on there is an option, albeit the last one, that the back-opener bats at No 3 and Virat Kohli moves down a spot to No 4. (ALSO READ: Absence of allrounder forces India to play three fast bowlers: Virat Kohli)

When push comes to shove, I still believe that’s an option worth exploring.

While KL’s situation is still manageable, Hardik’s is a serious one. He’s not yet the allrounder who wins games on his own with the bat and ball, but he brings immense amount of solidity and balance in this Indian set-up. Let’s get a few things out of the way. One, in limited-overs formats the third seamer is essential unless you are playing on an absolute dust bowl, which England won’t be. (ALSO READ: Beating well-balanced New Zealand at home is India s biggest challenge: Virat Kohli)

Now this makes Hardik’s ability to hit big a very essential part of the jigsaw. The biggest casualty in this Hardik episode unfortunately will be one of Yuzvendra Chahal and Kuldeep Yadav. If Ravindra Jadeja plays as the fifth bowler/allrounder, then India have to play three frontline seamers along with Kuldeep or Chahal. One of them will have to miss out and that will definitely affect Indian’s chances. They’ve picked up 87 wickets between themselves in the 23 matches they’ve played together, at an average of around 22 while striking every 28 deliveries. You don’t want to break this partnership and that is where Hardik becomes such an important cog in the wheel.

The team management might not have too much of control over the predicament faced by Hardik and Rahul but I believe they can try and soften the blow, if there is one coming. Time surely is running out.

Rishabh Pant gets my vote as the back-up opener. He’s a left-hander, instinctively attacking and is in good nick with the bat. He can also bat lower down the order if required. The seam bowling allrounder can be a tricky choice. Vijay Shankar played the last ODI and looked the part. He’s more of a batting allrounder but along with Kedar Jadhav, can be the fifth bowler.

With only 10 ODIs remaining before the World Cup, time is short and every opportunity should be treated as gold-dust, starting with the New Zealand series. 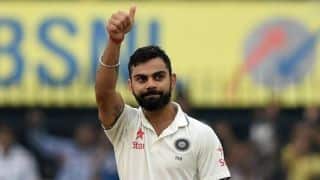 Reward for all the hard work: Kohli on sweeping ICC awards