First floodlights in 1889, Bradman's final Test, Spofforth's spell and others.

The first ever Test match in England, the birth of the Ashes, Gilbert Jessop’s swashbuckling 102, 903 for seven declared, Don Bradman’s farewell duck, Michael Holding’s monster spell,Viv Richards belting 291, Sunil Gavaskar compiling 221, Kevin Pietersen clinching the 2005 Ashes with his 158. The Oval has several other glittering factoids littered across its history –cricketing and otherwise.

Here are a few of them.

1. The Oval originated when an oval road was built around a cabbage patch at Kennington in the last decade of the 1700s

2. During the first fifty year, it remained a cabbage patch and then a market garden.

3. The Oval became a cricket ground in 1845 when 10000 grass turfs were brought from Tooting Common. The contract was worth £300

4. The ground was acknowledged as the headquarters of Surrey, but for many years its location was considered to be outside the county boundary

5. The famed gasholders that still stand outside the ground came into being a few years later, in 1853.

6. The first ever international cricket match in England was held at the ground in 1868. The touring team of Aboriginals from Australia played England in front of 20,000 spectators.

7. Two years later, in 1870, the first ever international football match also took place on the ground. England and Scotland played out a 1-1 draw

11. In 1880, cricket took over. The first ever Test match in England was played here and WG Grace scored 152 on debut

12. Two years later, the fire-breathing Demon bowler Fred Spofforth skittled England out for 77 after they had stood at 51 for two with a target of 85. This led to the birth of the Ashes.

13. The first floodlights were used in the form of gas lamps in 1889

14. From 1915, the feathers of Prince of Wales appeared on the Surrey badge – mainly because the land is owned by the Duchy of Cornwall.

15. In “MCMXIV”, his poem about the First World War, Philip Larkin referred to the ground in verse

17. Four years later, in 1938, England posted 903 for seven declared with Len Hutton getting 364. However, the groundsman Bosser Martin felt 1000 would have been more appropriate in a timeless Test

18. After the Second World War, however, England were bowled out for 52 when they played Australia again. This was the farewell Test of Don Bradman and he scored his famous duck. Read more on Bradman’s famous duck here

19. During the Second World War The Oval was planned to be used as a prisoner of war  camp. However, it never served as one. However, the ground did play a role in the War effort, by housing searchlights and anti-aircraft guns used in the London blitz.

20. The Final Test, a 1954 movie about a fictitious England cricketer – starring, among others,Len Hutton, Denis Compton and Alec Bedser –had many scenes shot on the ground. Much of the cricketing action were borrowed from the clippings of the famed 1953 Ashes encounter at The Oval, when England won back the urn.

21. At different times a Zeppelin and a hot air balloon were used for aerial views during Test matches at the ground. But, the plans to use them for spectators as a commercial option did not succeed.

22. Paul Getty, the American-born British philanthropist, was the President for Surrey CCC and had a replica of the ground built at his Wormsley Park Estate.

23. Rock concerts were held at the ground in 1971 – in aid of the war ravaged Bangladesh. The groups that performed were The Who, The Faces,Atomic Rooster, Eugene Wallace, America, Mott The Hoople ,Quintessence ,Lindisfarne, Grease Band and Cochise .

24. In 1972, The Oval hosted Australian Rules Football for the first time. In 2005, Chicago Bears of NFL trained at the ground.

25. A renovation worth £3 million was launched at the end of the 2002 cricket season. Permanent floodlights were installed in 2009. 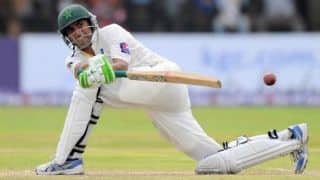