50 international cricket venues in India: a study in numbers

50 international cricket venues in India: a study in numbers

No country has come even remotely close to India's count of 50 international grounds: with 23 grounds, England is next on the list, while Australia and Pakistan both have 21.

On November 18, 2017, Greenfield International Stadium, Karyavattom, Thiruvananthapuram became the 50th venue to host an international match in India. No country has come even remotely close to this count: with 23 grounds, England is next on the list, while Australia and Pakistan both have 21. In other words, India have more international grounds than any two countries put together.

The pattern is worth a close look. India had nine grounds between 1933 and 1968. Of these, Bombay and Madras had two grounds each. Three more grounds including Bombay s third were added between 1969 and 1981.

Then came the boom: 18 more grounds were added to the list in the 1980s alone. This excludes the three in 1981 and 1982, which hosted the first three grounds to host ODIs on Indian soil. To put things into perspective, there have been only 17 more since 1990.

This obviously had to do with India s 1983 World Cup triumph. As the game spread into the nooks and corners of the country, eight grounds were added to the list in that year itself in locations as diverse as possible: Jaipur and Indore in Central India (some would put Jaipur in the North), Srinagar and Amritsar in the North, Baroda and Ahmedabad in the West, Jamshedpur in the East, and Guwahati in the North-East. The South had no reason to feel deprived: Thiruvananthapuram and Visakhapatnam were soon added to the list.

Jawaharlal Nehru Stadium, Delhi hosted the first day-night international match on Indian soil, in 1984. The ground also hosted the next match eight years later. However, as the money flowed in and the associations realised the importance of cricket under floodlights, that became the norm in the country.

Here are a few assorted observations from the list of grounds:

Of the 12 grounds, the only one with reasonable Test experience is Sardar Patel (Gujarat) Stadium, Motera, Ahmedabad: with 12 Tests, it ranks ninth on the all-time list among Indian venues.

Bombay Gymkhana was the first Indian ground to host a Test, or any international match, in 1932. Brabourne Stadium, despite hosting only three matches between 1969 and 2005, was the location for the first T20 International on Indian soil, in 2007.

It is a staple for quizzers, but in case you are not aware, Sardar Vallabhai Patel Stadium, Ahmedabad hosted the first ODI on Indian soil, back in 1981. It remains the only international match on the ground.

In fact, the next three ODIs in India were played at Gandhi Stadium (now Bishan Singh Bedi Stadium), Jalandhar; Barabati Stadium, Cuttack; and Gandhi Sports Complex Ground, Amritsar. All these were new grounds.

The first Indian ground to host two international matches was Eden Gardens, against England in 1933-34 and against West Indies in 1948-49. Two other grounds achieved the same that season: Chepauk, having hosted in 1933-34, also hosted in 1948-49; and Brabourne Stadium hosted two Tests in 1948-49.

The first 15 ODIs on Indian soil were played in different grounds (though Delhi had two grounds) which was another outcome of the post-1983 boom. The first Indian ground to host two ODIs was Keenan Stadium, Jamshedpur against West Indies in 1983-84 and against Australia in 1984-85.

Similarly, the first 13 T20Is were at different venues as well (this included two Mumbai grounds). Eden Gardens became the first repeater , with matches against England in 2011-12 and South Africa in 2015-16.

The states of Indian cricket

Maharashtra (7) expectedly has most grounds, followed by Gujarat (6). In other words, between them the two states have over a quarter of Indian international venues. This is hardly surprising, for these are the only two states with three Ranji Trophy teams, even today.

The next name on the list is a surprise. Many would perceive Green Park, Kanpur as Uttar Pradesh s only representative on the list. You can hardly blame them. Kanpur used to be a regular feature in India s Test calendar. Only four grounds Eden Gardens (40), Feroz Shah Kotla (33), Chepauk (32), and Wankhede (25), have hosted more Tests than Green Park s 22. Chinnaswamy is also on 22.

Lucknow has two grounds that have hosted one Test each University Ground (in 1952) and KD Singh Babu Stadium (in 1994). The latter has also hosted an ODI.

The fourth entry on UP s list is somewhat counterintuitive, for India is yet to play there: Greater NOIDA Sports Complex Ground is one of Afghanistan s adopted homes.

Greater NOIDA Sports Complex Ground has hosted international matches, but never involving India. The ground is unlikely to feature a match without Afghanistan in near future.

However, it is not the only all-neutral ground in India. Sri Lanka and Zimbabwe played their match in the 1993 Hero Cup at Moin-ul-Haq Stadium, Patna. Three years later, in the 1996 World Cup, Zimbabwe played there again this time against Kenya. The first match was washed out after 95 balls. It was replayed the day after. Zimbabwe, thus, have played all matches played at the ground just like Afghanistan at Greater NOIDA.

Just for the sake of information, the first neutral match on Indian soil was a World Cup 1987 match, at Lal Bahadur Shastri Stadium, Hyderabad, between New Zealand and Zimbabwe.

The most matches played by a visiting team at a single Indian ground is 16 by England and West Indies at Eden Gardens and by Australia at Chinnaswamy.

Who lent their names?

Additionally, two grounds (at Visakhapatnam and Vijayawada in the same state, of Andhra Pradesh) have been named after Nehru s daughter Indira Gandhi, also a Prime Minister. Rajiv Gandhi, son of Indira and another Prime Minister, has one named after him in Hyderabad as well, taking the family count to ten.

However, it was not always Nehruvian. Mahatma Gandhi (expectedly) has grounds named after him at Amritsar and Jalandhar. The latter is now named after Bishan Singh Bedi, the only international ground in India to be named after a Test cricketer.

MA Chidambaram, M Chinnaswamy, IS Bindra, Seshrao Wankhede, and YS Rajasekhara Reddy (also a former state chief minister) have all been cricket administrators. They have grounds named after them at Chennai, Bengaluru, Chandigarh, Mumbai, and Visakhapatnam respectively.

Lal Bahadur Shastri, India s second Prime Minister, has a ground named after him, at Hyderabad. Both grounds in Ahmedabad have been named after Sardar Vallabhbhai Patel (though one of them is spelled Vallabhai), India s first Deputy Prime Minister.

Moin-ul-Haq, former General Secretary of Indian Olympic Association, lent his name to the ground in Patna (the one with only neutral matches).

The British had introduced the sport to India, and left a few international grounds named after them behind him. The most famous of these is Eden Gardens, named after Emily Eden. Emily was the sister of George Eden, India s former Governor-General.

Michael Knatchbull, 4th Baron Brabourne, had laid the foundation stone of the ground named after him in Bombay.

It was only obvious that the Jamshedpur ground would be named after someone significant at Tata Steel. They chose John Lawrence Keenan, former General Manager.

Of course, Green Park is the most curious of them all. One Madam Green used to practise horse-riding in the Kanpur ground in the 1940s. The ground also bears the nickname of Woolmer s Turf (Bob Woolmer was born at a hospital opposite Green Park). Had the name been official, it would have been the only active international ground in India named after a cricketer.

There are 217 grounds in the world that have hosted senior men s international matches. Of them, only one has a numeral in its name: Sector 16 Stadium, Chandigarh. 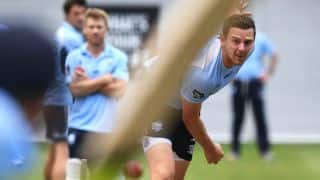 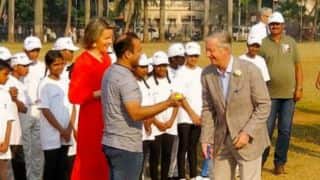