The period between 1890 and 1914 was like any other era, with almost the same mix of dashing daredevilry with the bat and methodically precise stonewalling.

July 18, 1900. In what was perhaps the zenith of the Golden Age of cricket, the Players chased down 502 at Lord s to win an incredible encounter against the Gentlemen. Arunabha Sengupta recounts the miracle at Lord s.

The Golden Age of Cricket, as often repeated in these pages, is a romantic construct of wistful and selective retrospection due to a gamut of historical reasons. The period between 1890 and 1914 was like any other era, with almost the same mix of dashing daredevilry with the bat and methodically precise stonewalling. Paraphrasing the words of the immortal Dickens, In short, the period was so far like any other period, that some of its noisiest authorities insisted on its being received, for good or for evil, in the superlative degree of comparison only.

However, like any other age, the years were blessed with some remarkable moments, matches and magic. Pitches improved a lot from the dicey early days, the bowling only occasionally erred into attacking the legs, and there were flowing drives through the off as never seen before. Yes, there was some great cricket.

And perhaps one of the greatest of showdowns that formed the epitome of the flair and brilliance characterising the Golden Age took place at Lord s in 1900, in the season s top-billed Gentlemen vs Players encounter, played throughout the three days in brilliant July sunshine.

The Empire, while at its dazzling peak, was being plagued by the unfortunate tidings from the raging Boer War. Every day young men boarded vessels from Southampton, Woolwich and Colchester, to fight for Britain and perhaps die as war heroes. The nation needed sporting diversions. And there were no Australians visiting England that summer, except for wily Albert Trott who had made Middlesex his home.

Hence, the Gentlemen v Players match was the pick of the season, awaited eagerly by all. And although missing from action were a host of superlative names of the Golden Age, the cricket that was produced was incredible in quality and excitement.

Indeed, there was no WG Grace, the aging champion missing the fixture for the first time in 35 years. The Gentlemen also missed the services of KS Ranjitsinhji, who inexplicably turned out for Sussex against Hampshire on the same day and ended with scores of 41 and 88 not out. Also not in the team was Archie MacLaren, another sparkling name of the Golden Age.

The Players were also without some brilliant professionals of the day. Arthur Shrewsbury did not take part, thus scooping out a great chunk of the meat of batting. Enormous names such as George Hirst, Schofield Haigh and Johnny Tyldesley were also left out of the professional side. Also not playing was the fearsome Surrey fast bowler Billy Lockwood, taking a three-day break after the game against Essex before charging into Ranji at Hove the day after the Gentlemen-Player encounter ended.

Yet, so fantastic was the array of talent in England in that era that there was no shortage of brilliance in spite of the colossal absences. Reggie Foster and CB Fry compensated for Grace and MacLaren, Tom Hayward, Jack Brown and Bobby Abel for Shrewsbury and Tyldesley, Wilfred Rhodes and Albert Trott provided all-round balance for the absence of Hirst, while the swashbuckling genius of Gilbert Jessop more than made it up for the amateurs. And while the absence of Lockwood left the Players without a genuinely fast bowler, the Gentlemen supplied three for the match in the form of Charles Kortright. Sammy Woods, and the still nippy Jessop.

The brilliance of Foster

The sun shone with all its benevolence for 12 hours each day, and a temperature in the late 20s provided all the setting for an extraordinary match.

Woods won the toss and Gentlemen batted. And it was young 22-year-old Foster who showed the way in which sparkling strokeplay was to feature in the game.

With the wicket hard and fast, even Fry was caught in two minds quiet often as he pushed uncertainly on his way to a useful but sketchy 68. But Foster, who had lit up the summer with 171 for Oxford in the Varsity match, hit the ball magnificently through the off-side.

After the match, Fry made his assessment. And Fry s assessments carried a lot of weight. He had seen only Ranji wield the bat with greater speed and fluency.

That day Foster scored 102, and at one time it seemed uncertain that this brilliant young man would get his hundred. He was 85 when the ninth wicket fell, and his Oxford team-mate Harry Martyn made his way into the ground. But, it just underlined the batting depth of the side.

Martyn, tall and long-armed, was a superb wicketkeeper and more than capable batsman. He had already scored 94 in 50 minutes for Oxford as Foster had flayed the Cambridge bowling for 171. But for the magnificence of Dick Lilley, he would have played for England too. Martyn did not score much that day, but he stayed long enough for Foster to get his hundred. The batsman did so by thrashing John Gunn for 13 in an over. When Gunn, the latest recruit from the famous cricketing family, got the wicketkeeper caught, the score amounted to 297.

Left with just over 100 minutes to bat, the Players had a torrid time. Kortright and Jessop bowled frighteningly fast. Abel and Billy Quaife took quite a few hits on the body, and for some reason the crowd thought it hilarious. Albert Ward was caught in the slips, the ever reliable Hayward was bowled by Jessop and at the end of the day the score read 67 for 2.

The following morning the Players surrendered to some brilliant fast bowling. Kortright, Mason and Jessop made them hop, and captain Woods did not even have to put himself on.

Abel, limping from the blow from Jessop, was yorked for 30. One or two of them seemed content just to get out of the way. The catching was brilliant. The Players folded for 136 way before the luncheon interval.

In contrast, in the absence of Lockwood, the medium pace and spin of the Players seemed strangely innocuous. The guile of Rhodes did get them a couple of wickets, but at 42 Fry was joined by Foster and the match was taken away from them.

It was a brilliant young man riding on confidence and gift, and Foster struck the ball with a flourish that reduced Fry to a spectator. Indeed, that is no elaboration. At one stage, Foster scored 72 with Fry circumspectly picking up 9. And he was content to do that.

Foster, in his first appearance in a Gentlemen v Players encounter, achieved the distinction of a century in each innings, reaching his three figures in just hundred minutes. Fry batted two and a half hours for 72. But all around him were fireworks. Jessop screamed his way to 18 off 6 balls. Trott picked up six of the wickets, but no one noticed his feat, so caught up were they in the exuberant strokeplay in the innings of 339 in three hours.

The target was a towering 501, and the Players were in to strive for the impossible with three-quarters of an hour to go for the close of play on the second afternoon.

Yet, they remained positive. Jessop made short work of Ward, but Quaife, opening in place of the injured Abel, parried with Brown to end the day at a creditable 44 for 1.

Another glorious day dawned and the wicket remained true. Quaife and Brown resumed their innings circumspectly. When the experimental leg-breaks of Arthur Jones claimed Quaife for 29 scored in over an hour, the total read 81 for 2. It was heartening to see captain Abel come in, the limp still perceptible. However, few expected the battle that was about to be fought.

Abel, 43 years old, of known pedigree but mysteriously unsuccessful at Lord s, played with a freedom seldom associated with him. The bowling was short, the battery of fast bowling amateurs influenced by the fiery wicket. And Abel pulled and cut with supreme abandon. A few days ago he had thrashed Essex at Leyton for 137, and he carried on in the same vein.

Brown, on the other hand, had been struggling for runs all season. But here, as Abel flourished at the other end, he rocked on the back-foot to flay the short-pitched bowling to all parts of the ground. As they progressed, there were indications that the match could be drawn. The score at lunch was 242 for 2.

Immediately after the break, Abel pulled Jessop and Jones at square leg brought off a superb catch. The captain had fallen two short of what would have been a superlative century. But the steady, assuring form of Hayward made its way to the wicket. And Brown, not missing a step over the dismissal of the skipper, continued to cart the bowling around.

102 were added in an hour and a half, before Brown fell for a supreme 163. The innings had been one of the best he would ever play and studded with 28 boundaries.

It was 348 for 4, and Players still required 153 in just over two hours. When Woods tore in to flatten the stumps of Harry Carpenter, it did seem to be a case of so many superhuman efforts that collapsed just short of the coveted goal.

However, Lilley drove well and Hayward continued the chase like a man possessed. 69 were added in quick time before the wicketkeeping ace cut Mason on to his stumps. 448 for 6.

Hayward carried on. Having been the anchor during Brown s hitting, he now drove with lan and panache. Racing past his hundred, he was guiding the innings in his secure way. Trott was an admirable man to have at the other end.

But Kortright sprinted in with the final bit of venom. Hayward s stroke was a trifle awry, the edge flew low and fast and Martyn flung himself to the right to come up with a spectacular catch. End of a great innings of 111.

A few minutes later, Kortright sent down a delivery that few could follow with the naked eye. Gunn s stumps flew. 485 for 8.

Trott was joined by Rhodes.

The Australian was a classy all-rounder, deserving a position much higher in the order. The previous season he had entered cricketing folklore by sending Monty Noble over the Lord s pavilion. He would end the season with 1,337 runs and 211 wickets.

Rhodes, already making his strides as the next great name in the English annals of left-arm spin, had been working on his batting. He had managed 53 against Derbyshire and 79 against Sussex. He was still a season away from his first First-Class century, but no mug with the bat.

At the stroke of 6.30, the scheduled close, Lord s was still basking in sunshine when Woods was struck for the winning boundary. The Players had scored 502 in the fourth innings to win by 2 wickets. The triumphant batsmen ran out of the ground in blazing glory.

Reporting it the following day, Times called it a fourth innings almost unique in cricket of any standing before ending philosophically with the words Cricket is inexplicable . 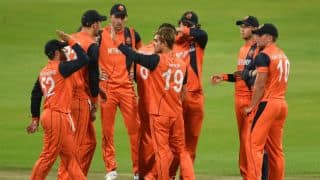 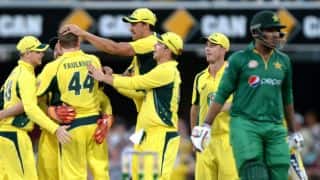