The criticism faced by MS Dhoni has been overwhelming to say the least.

India’s have had a torrid couple of weeks since their memorable win at Lord’s. They lost the next two Tests — at Southampton and Manchester — in shocking fashion, and head to The Oval trailing 1-2 behind England. The criticism faced by MS Dhoni has been overwhelming to say the least. Shiamak Unwalla looks at seven criticisms faced by Dhoni in recent times.

1. “If he (Dhoni) did back down from Test cricket, India wouldn’t miss his strange, often weird, tactics. His selections are illogical when finding the appropriate balance in picking enough specialist players to out-skill the opposition over long periods.” – Martin Crowe in Cricinfo.

2. “A lot of MS Dhoni’s captaincy throughout this series has been questionable. It seems to me that he is trying to do things that people say he shouldn’t do just to prove them wrong. That is the impression I get.” – Michael Holding in Wisden India.

3. “You can always lose, that is fine, but you go down fighting. I did not find him [MS Dhoni] do that. To me the captain has lost his usefulness and it is time for him to go.” – Ian Chappell slamming Dhoni’s captaincy in the ongoing series as only he can.

5. “I am not a big fan of Dhoni, but I must surely say that no one has ever enjoyed so much of power and authority from the cricket body. I believe that not even the great Tiger Pataudi or Sunil Gavaskar had ever enjoyed this kind of power. As a leader, Dhoni is not accessible to his teammates. This has been said by his teammate, none other than VVS Laxman.” Bedi said in January 2014 at a book launch referring to Laxman’s quote during his retirement.

6. “His Test captaincy has been obnoxious. But changing captains now will unsettle the team. His place is not in doubt in Test cricket, but Dhoni needs to set the overseas record right.” – Sourav Ganguly following India’s 1-0 Test series defeat in New Zealand in 2014.

7. “I think he’s got to realise this very quickly, that if he wants to win Test matches abroad, he’s got to risk it all. He’s got to take that chance that he’s going to have to lose some Test matches. The only way you can win abroad is to take a few risks, take a few gambles.” – Rahul Dravid in Cricinfo following India’s 1-0 Test series defeat in New Zealand in 2014. 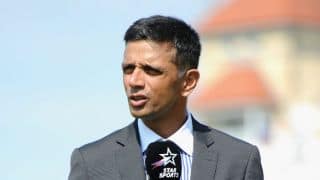