Andrew Strauss was not the only one to say something untoward on-air.

Andrew Strauss had, albeit in a momentary error, used an unprintable word to refer to Kevin Pietersen while commentating on Sky Sports during the Lord’s bicentenary match. Abhishek Mukherjee looks at other incidents where the commentator got a bit “carried away.”

Ball-by-ball radio or television commentary is not like any other job: it comes with the responsibility of reaching out to millions as they tune in to follow their favourite stars. While there have been outstanding ones like Alan McGilvray, John Arlott, and Richie Benaud, some others — albeit unintentionally or in a moment’s lapse — have got carried away and had said something they probably would not have under ideal conditions.

Andrew Strauss had done something similar in the Lord’s bicentenary match. As The Telegraph mentioned, Strauss had been in conversation with Nick Knight during a commercial break, and had not realised that telecast had resumed. A lot of spectators had heard Strauss refer to Kevin Pietersen as a c*nt.

Sky Sports apologised on Twitter almost immediately, which was followed by another apology from the man himself: “I apologise unreservedly, particularly to Kevin Pietersen. I am mortified and profusely sorry.” Following that, when Adam Gilchrist summoned Pietersen to bowl, Atherton passed the microphone over to Strauss with a seemingly innocent “over to you.”

Maybe Sky Sports will take strong measures against Strauss. Maybe they will not. The incident is, however, not a one-off: there have been precedents of commentators making on-air gaffes (not the bloopers). Let us take a trip down memory lane:

Seldom has a commentator single-handedly caused a riot before or after Puri. It was the first Test of a disastrous home series for India: they had conceded a first innings lead of 66 and were reeling at 89 for seven with Ajit Wadekar playing a lone hand. At this stage he was joined by Srinivas Venkataraghavan, and the pair added 25 before the fateful incident happened.

Alan Connolly ran in, pitched one outside off, and Venkat threw his bat at it; the ball was pouched by Brian Taber behind the stumps, the tourists went up in unison, and Sambhu Pan raised his finger. Venkat looked shocked at the decision, and as he walked back, Taber himself reacted: “He (Venkat) missed it by a foot!”

Puri echoed his thoughts on All India Radio; unfortunately, the crowd had been cramped into a stadium with sub-par amenities and was already incensed by the heat and humidity and the inept performance by the home team. They had come to the ground armed with transistor radio sets, and Puri’s comment turned out to be the proverbial straw that broke the camel’s back.

Stands were set on fire; chairs were smashed; and amidst all the commotion play continued. India lost EAS Prasanna as well, and when the players were about to return after the day’s play, the crowd was desperate to get at the Australian cricketers (especially Bill Lawry, who had not recalled Venkat); the fielders stood armed with stumps and bails, and had to be escorted by the police. Dressing-room windows were smashed with rocks, and the rest of the series was played under police protection.

Though racism was not reacted to as seriously in the 1960s as it has been in recent past, things had taken a turn after South Africa’s ban from the world of sport; Ian Chappell, known for his outspoken nature, had got a bit too carried away on Channel Nine with his comments. He had sworn (though the exact words are unknown) once in the 1970s, but did get away scot-free, probably on the ground that he was under the impression that he was off-air.

Almost as outspoken as Chappell, Greig had got away with another comment in 1999 that can easily be classified as racist. To quote Alex Brown and Chloe Saltau from The Sydney Morning Herald, “(Tony) Greig uttered, ‘Do you think she has been flown in?’ — a mail-order bride reference 015 when cameras panned to a wedding reception behind North Sydney Oval that involved a Caucasian man and Asian woman.”

Sidhu’s metaphors and colourful use of the English language have had their shares of praises and brickbats, but his words on air while commentating in 2003 was a bit too much for ESPN-Star to handle. When Alan Wilkins asked Sidhu (in a light-hearted tone, one must add) to pronounce ‘Worcestershire’, Sidhu responded with the phrase — while still on air — “Don’t f**king provoke me, Wilko” (sources differ on the exact words, but they all agree on the inclusion of the f-word).

Sidhu’s stint with ESPN-Star ended shortly afterwards, though it was denied by both parties that the incident mentioned above had been the reason.

Perhaps the most famous of these incidents, Dean Jones had made a comment (once again during a commercial break) when Hashim Amla caught Kumar Sangakkara off Shaun Pollock. Unfortunately for Jones, though there was an advertisement in Sri Lankan telecast, the South Africans got to hear Jones’ words: “The terrorist gets another wicket” — a clear reference to Amla’s beard. Jones was sacked by Ten Sports with immediate effect. “Sorry, mate, I didn’t mean for it to come out on air,” was Jones’ somewhat feeble apology to Amla.

Whether Healy’s comment could be classified as racist is debatable, but when Umesh Yadav walked out during India’s debacle at WACA, Healy said: “He’s just finished his butter chicken!” It was perhaps said in jest, but if one classified the sentence as borderline racism, he could not be dismissed.

7. And finally, some humour, thanks to Brian Johnston…

Few posts on commentary can be compete without “Johnners”, and this (perhaps an apocryphal one, perhaps not) is certainly no exception. Johnston received a lot of fan mail thanks to his insights on Test Match Special, but on one occasion he received severe criticism from a woman who had turned out to be Ken Barrington’s mother.

Johnston’s gaffe was an unusual one: Barrington, on his way to yet another sublime hundred, had offered a chance when he was two; the chance had been grassed. Johnston had made the comment “Ken Barrington was dropped when on two.” Mrs Barrington was not amused: she had not dropped her son when he was two years old. 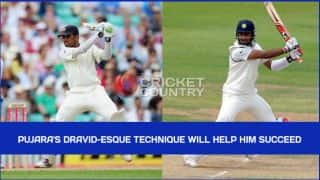