According to Law 37, “Either Batsman, on appeal, shall be out Obstructing the Field if he willfully obstructs the opposite side by word or action.”

According to Law 37, “Either Batsman, on appeal, shall be out Obstructing the Field if he willfully obstructs the opposite side by word or action.” Two men representing the batting team in the middle of a cricket field will do their utmost to maximise runs and minimise risks to guard their own wickets. Any one of them can be given out ‘obstructing the field’, a stamp on their alleged illegality of their perceived attempt to hinder the fielding team. The rarity of the dismissal is an indication that there is knowledge that such attempts would be caught out in the few instances they are needed. When Ben Stokes was given out for preventing the ball from hitting the stumps when he was returning to his crease, the immediate consideration was he was reacting to the danger and shock of the hard cricket ball thrown at his direction. In the other times the dismissal has existed in an international fixture, inferences have not been so polarising. Read: Obstructing the field: History of the unusual mode of dismissal

Here are eight cricketers who were given out for ‘obstructing the field’:

Len Hutton: The former England captain, Len Hutton, was the first international cricketer to be given out for obstructing the field. He had top-edged a ball from leg-spinner Athol Rowan while batting on 27 in the fifth Test against South Africa at The Oval, in 1951, and in the worry that the ball may hit the stumps, he played the ball with the bat a second time. The umpires ruled that by this act, he had disallowed wicketkeeper Russell Endean from claiming a catch. This was the first and so far, the only time a batsman had been given out invoking Rule 37 (in the MCC rulebook) in Tests. Read: Len Hutton becomes first to be given obstructing the field in Test cricket

Rameez Raja: The Pakistan batsman and now a prominent commentator, Rameez Raja, was unbeaten on 98 when facing the last ball of a rain-shortened One-Day International (ODI) against England in 1987 in Karachi. While taking the second run to get to his century, he used his bat to prevent the ball from hitting the stumps. His team had already lost the contest: they were 23 runs short of their target before this last ball was bowled. This was the first time an obstruction had occurred in an ODI.

Mohinder Amarnath: Two years later, in 1989, India’s Mohinder Amarnath had kicked a ball away from the bowler to avoid getting out, he became the first and the only Indian to be given out to this rule. This was in an ODI against Sri Lanka in Ahmedabad, a fixture won by India by six runs. Amarnath was in the middle of a fruitful partnership with opener Navjot Singh Sidhu, who eventually scored 80, when the incident occurred. The bowler was Ravi Ratnayake, a right-arm fast-medium bowler. Amarnath has, in his career, also been out handling the ball.

Inzamam-ul-Haq: ‘I can’t understand the rule because in Faisalabad, I left the ball and I [was] out and now I stop the ball I’m out, I don’t know what the exact rule is. I can’t understand the rules.’ When Inzamam-ul-Haq said this to Rameez Raja at the post-match presentation for the first ODI between Pakistan and India in Peshawar in early 2006, the tone was light-hearted and funny. It was anything but funny for him when the Indians had appealed for obstruction as he gently tapped the ball like a defensive stroke when Suresh Raina, from mid-on, had thrown the ball back at him. He had stepped out of his crease while in the motion of playing the stroke, and was languidly going back to his crease when the incident happened. A shocked Inzamam consulted the umpires after he was given out, and looked incensed. Michael Holding, in the commentary, reckoned the appeal made by the Indians could have been suggested. The reference to Faisalabad was about an incident that had him weaving away from a throw by bowler Steve Harmison — after Inzamam had played back to him — in a Test late 2005.

Mohammad Hafeez: The Pakistan opener, Mohammad Hafeez, was adjudged to be running in the line of a throw for a run out, to be given out in an ODI match against South Africa early 2013. This happened in the second over of the game. After being adjudged out, Hafeez and his captain Misbah-ul-Haq explained the change in his line of running was not intentional. The rule to use the ‘Obstructing the Field’ dismissal had not long ago been tweaked to include the intentional attempt by batsmen running between the wickets to come in between the stumps and the throw, by a fielder for a run out. Hafeez was the first batsman to be out invoking the new addition.

Anwar Ali: Anwar Ali in November 2013 was adjudged out obstructing the field in the second ODI of their tour of South Africa. He was running between the wickets, rushing to get to the non-strikers’ end, when a throw from behind him struck him on his shoulder. The thinking behind the dismissal was that Ali had anticipated the line of the prospective throw and wanted to get between the ball and the stumps. Pakistan won that match by one run, thereby registering their maiden ODI series won against the hosts.

Yusuf Pathan: It was in the Indian Premier League (IPL) 2013 edition that Kolkata Knight Riders (KKR) batsman Yusuf Pathan became the first person in the tournament’s history to be given out for obstructing the field. Pathan was batting on 72, when Pune Warriors India (PWI) bowler, Wayne Parnell, bowled a Yorker. After managing to save himself from the Yorker, Pathan tried to take a single. As he saw Parnell run towards the ball, Pathan pushed the ball away with his foot. The umpires after consulting gave Pathan out for obstructing the field.

Ben Stokes: Ben Stokes’ dismissal had people divided over the perception of it. A ball thrown at a furious pace has an immediate reaction of safety from Stokes, believe many, but others point to the direction of the throw going away from his body and towards the stumps, and his hand preventing the ball from hitting the stumps. Real-time replay shows Stokes horrified at being thrown the ball at, and putting a hand out. But the umpire ruled it out. This may have been fulfilling the requirements of the rule book, but the main point of consideration was the fielding team’s decision to appeal, a question asked by Inzamam in 2006 as well. Read: Ben Stokes and others who have been dismissed obstructing the field 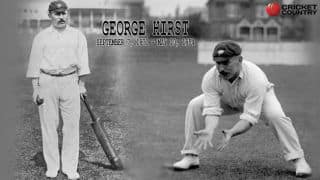