I was in a dilemma before I attempted to review A Clear Blue Sky for at least two reasons. First, I found it extremely difficult to live up to the standards set by the book, but more of that later. But more importantly, I found it very difficult, almost impossible to detach myself emotionally from the book, thus violating one of the most important prerequisites of reviewing any form of art.

Great cricketers often do not write outstanding autobiographies or become the subject of excellent biographies. There are exceptions like Arthur Mailey and Ian Peebles, whose penmanship have probably exceeded their talent on field. Drewy Stoddart, Wally Hammond, Jack Iverson, and Bob Appleyard, on the other hand, have been brought to life by David Frith, David Foot, Gideon Haigh, and Stephen Chalke.

These are only a handful of examples. And I am not even including the legion of New Zealand cricketers men who have written some of the finest cricket autobiographies but seem curiously uninterested in marketing them (read: making them available in India).

Authors still continue to produce cricket books of the highest quality. Unfortunately, they seldom include books around lives and careers of contemporary cricketers. Marcus Trescothick did produce a gem, but he was an exception, not the rule.

Social media and the internet have helped to reduce the chasm between fans and the daily lives of cricketers. Among many benefits, that added familiarity also comes with a drawback: it eradicates the possibility of an autobiography featuring topics the reader does not know. Who will sit through, let alone buy, a hard-bound book full of things he is already aware of?

A Clear Blue Sky has filled for that void, for Jonny Bairstow and Duncan Hamilton have put together an autobiography of a quality matched by few in history.

Bairstow is not your everyday Test cricketer. He bats, keeps wickets, breaks records. His quips behind wickets can bring you to splits, but more significantly, he has a past to narrate a past the world is aware of but needed some telling. Indeed, there were a lot of expectations from the book; and Bairstow (and Hamilton) has lived up to every single one of it.

The book switches seamlessly (almost magically) between David Bairstow and his terrific career for Yorkshire, the baffling suicide that shook a family; and a steep battle of Jonny against odds.

One can almost sense the death that had ripped apart an eight-year-old Jonny but the suicide is not all one gets to know about Bairstow Sr. David Bairstow is described vividly and in the most humane way possible. Jonny tries to remain objective about his father s career and does a brilliant job of it and yet, his respect for his father and the void left in him is unmistakable.

But David s presence is not restricted to his career, either. He continues to stay with Jonny (and the reader) throughout the book. The reader perceives David s presence as Jonny rises through the ranks in English cricket; he travels to and fro in time between David and Jonny, for father and son are inseparable from one another.

But that is not all. There are those subtle bits that will make you smile despite remembering what those days were like: what is that they say about sadness expressed with a smile being the highest form of humour?

The battle was uphill. The death was followed almost immediately by media personnel swamping around the residence. There were financial challenges, for the insurance company refused to pay.

And yet Bairstow rose in life. It was an uphill task. At times the battle was more psychological than anything else. But he underplays his own achievements so elegantly that you tend to overlook them. Then you suddenly realise that the person in question is a certainty in the England Test side, and marvel at the brilliance.

There are numerous anecdotes, mostly fresh ones. There are pages written (and written beautifully) on the inevitable bond the Bairstow family developed with time (though the absence of his half-brother Andrew comes across as odd).

There is also a clear, evident knowledge of the history of the sport. For example, he calls his father multi-talented, but is also quick to point out that he wouldn t have claimed to be C. B. Fry , whom Mark Ramprakash had emulated when he brought up his hundredth hundred; or how a 46-year-old Brian Close stood up to the West Indian fast bowlers; I can go on.

If Bairstow s against-the-odds journey has been incredible, Hamilton (remember his award-winning biography of Harold Larwood?) has lived up to the difficult assignment of narrating it in the most lucid way possible. The style is addictive enough to force me to quote some extracts. Sample this: Everyone believes their family is special. Mine just is.

Or this, on the relationship between the wicketkeeper and the first-slip: Eventually, you become like an old married couple, so comfortably familiar that you re capable of finishing one another s sentences. But, in Sydney [2013-14], Cookie [Alastair Cook] and I were practically at the stage of a first date and still getting used to the way the other played.

Or this: Len Hutton, who didn t have the benefit of a helmet, once said that the best place to play a fast bowler is from the non-striker s end , which is a short-term plan but not a sustainable strategy.

On David Bairstow s angry outburst at Ray Illingworth: Sailors in the Viking area of the North Sea are believed to have heard clearly what he said.

Or this, on his maiden Test hundred: Eventually the noise of the crowd dies away, and I think of starting my innings again. But I take one last look at the sky. If heaven has a pub, I hope my dad is in it now. I hope he s ordering a pint to celebrate. Then I hope he orders another.

The pride in the Yorkshire cap was something father and son both believed in. David Bairstow was probably more Yorkshire than England. Jonny has already carved out a promising Test career, but he is as aware of the history of the club and as proud to don the White Roses cap as his father used to be.

It is difficult to pick any one aspect that makes the book special. It is difficult to choose between the style and the anecdotes, the grief and the grit, the cricket and philosophy, the pride and the fears, and the philosophy towards life in general. The emotional depth of Bairstow, still on the right side of thirty, is remarkable but perhaps not as remarkable as the innocence he retains despite how life has hardened him.

No, it is almost impossible to choose one aspect, so I will not even make an attempt. I can opt for something easy instead: I will predict, without any hesitation, that A Clear Blue Sky is going to win many, many awards.

If you choose to give it a pass, the loss is yours. 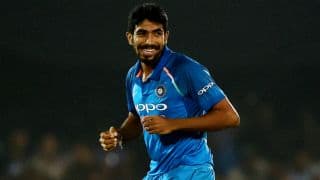