A cricketing epic that this generation was privileged to witness!

A cricketing epic that this generation was privileged to witness! 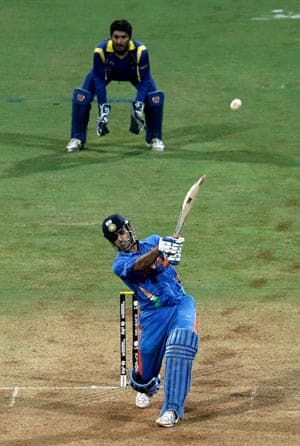 I’ve done my sentence/ But committed no crime

And bad mistakes/ I’ve made a few

We are the champions!

The above lines from “We are the champions” sung memorably by Queen ring in my ears. As I’m writing this piece, minutes after Team India took the victory lap, fireworks still adorned the sky and people were out on the streets of Bangalore screaming their heads off, cheering, hugging absolute strangers, and distributing sweets even. Mahendra Singh Dhoni and his men in uber cool blue have proven, yet again, why they deserve the World Champions status.

Shantakumaran Sreesanth’s atrocious bowling and the 65-run mess in the last five overs, notwithstanding, the Indian team did not flinch at the sight of the seemingly grand total of 274. Neither did they hit the panic button when the two openers got out quickly – although the rest of the nation did. Therein is the secret of this historic win.

I must confess, like numerous others, I too was totally dejected and had lost hope when Sachin Tendulkar got out. It was the World Cup final and we’ve seen and talked at length about the Great Indian batting collapse. I also take back every despicable thing I said about Yuvraj Singh and Gautam Gambhir before the World Cup. Both these batsmen played their best when it was needed most.

It was no surprise that India started the World Cup as favorites, going by their success in the tournaments preceding it. Living up to such hype is no easy task. But they did, rising slowly and steadily, picking out their opponents one-by-one. Just to remind you, Team India lost only one match in this tournament – to South Africa. The other one against England was a tie!

After struggling for a major part of the league stage and taking in criticisms from all quarters, the team displayed a whole new level of confidence and determination when they entered the knock-out stage. They knew that from here on, they were just three matches away from lifting the cup and also that there’ll be no second chances.

They packed off oft-crowned World Cup champions Australia and then beat arch-rivals, Pakistan. Then, to have the captain of the Sri Lankan team concede that India was the better team! We could not have asked for a better final. What’s more, we had the leader absorb all the pressure and score the best 91 runs of his cricketing life, to ensure the World Cup stayed where it belonged! The question as to whether Dhoni is the best captain Team India has ever had, has been answered. And how!

The celebrations have only just begun. With the fourth season of the IPL round the corner, each of these members will head in different direction. Post the IPL, there’ll be more cricket, more foreign tours and some international cricket on home turf. But this moment of Team India lifting the World Cup, will be etched in our memories for years to come. And we are one hell of a privileged generation to have witnessed this epic saga.

(Bangalore-based Tejaswini Tirtha spent the first eight years of her career in mainstream media, having worked with leading dailies like Times of India, The New Indian Express and Asian Age, tracking new trends in the film, fashion, theater and gaming industries. A couple of years ago, she was bitten by the corporate bug, but tried to keep the journalist in her alive by grabbing every writing opportunity that came her way. Her other interests include reading, music, watching movies, traveling, F1 racing and of course, cricket)