Though mostly prevalent in India and Nepal, Holi has been gaining popularity across the world.

Holi, for the uninitiated, is the festival of colours, celebrated primarily in India and Nepal. As the world celebrates the festival that marks the advent of spring, Abhishek Mukherjee lists a squad of cricketers with “colourful” names.

Holi, primarily a Hindu festival, has spread its wings among non-Hindus across the world. It is usually celebrated on the day of the full moon the month of Phalgun, which is usually less than a month before Vernal Equinox. Though mostly prevalent in India and Nepal, Holi has been gaining popularity across the world. Holi is, of course, the festival of colours, celebrated with gulaal. It marks the advent of spring in more ways than one, but perhaps none more than welcoming the season of love with colours. Here, then, is a list of cricketers with “colourful” names.

1. Bill Brown (captain): An outstanding opening batsman and a spectacular fielder, Brown’s career was hampered by World War II and the success of the pair of Arthur Morris and Sid Barnes at the top. Despite that, Brown scored 1,592 runs at 46.82 and made it to Don Bradman’s Invincibles, but remained the third-choice opener. Brown’s finest hour came in the Lord’s Test of 1938, when he carried his bat through the innings with 206.

2. Violet Wattenburg (wicketkeeper): With 31 Women’s International matches for Netherlands Women under her belt, Wattenburg makes her way to the squad with her role behind the stumps. Competent with the gloves, Wattenburg opened batting against South Africa Women at Rotterdam, and was ninth out for a 378-ball 49 without a single boundary: your perfect stonewaller.

3. Martin Olive: Somerset gave Olive an extended run in 1980, but he did not live up to their expectations. A top-order batsman, Olive opened batting with Sunil Gavaskar against Yorkshire and scored 50, and 46 more against Hampshire — but that was about it.

4. Gordon White: Gordon White, one of the quartet of googly bowlers (technically a batsman who bowled, while Reggie Schwarz, Bert Vogler, and the legendary Aubrey Faulkner being the main trio) South Africa had in the first decade of the 20th century, gets a nod ahead of Jack, Craig, and Cameron. The fourth-choice of the quartet, White claimed only 9 wickets — but his 155 First-Class wickets came at 20.05. He also scored 872 Test runs at 30.06 with 2 hundreds.

5. Amber Boyce: Boyce, of Canterbury Women, has played 20 Women’s T20 matches, but her career did not really take off. A top-order batter and an occasional medium-pace bowler, Boyce made 20 appearances for Canterbury Women.

6. Alfred Pink: Pink’s solitary First-Class appearance came in a County Championship match against Somerset at Taunton. Though Hampshire lost the match, Pink scored 15 and 39, and claimed a wicket for 15 runs with his medium-paced bowling.

7. Edward Ash: Norfolk-born Ash did not have a particularly great career. His 5 matches for Cambridge University fetched him 126 at a mere 12.60, but he scored a gritty 47 on debut against Cambridgeshire when his team was bowled out for 98.

8. Amanda Green: Green’s finest moment came against Ireland Women at Dublin in 2004, when the 20-year old opened bowling and returned figures of 9.3-5-15-5 to rout the hosts. With 12 wickets at 32.25 (not to speak of being a hard hitter), New Zealand-born Green makes it through.

9. Tony Gray (vice-captain): Had he been born in any other era, Gray would have had a 50-Test career, but being a West Indian fast bowler in the 1980s came with its disadvantages. Gray was fast, mean, and accurate, but injuries and stiff competition kept him out. He played only 5 Tests, all away from home, and picked up 22 wickets at 17.13 and a strike rate of 40.3.

10. Marlon Black: Black claimed 12 wickets from 6 Tests, but to be fair to the West Indian, he played in one of the more difficult tours possible — in Australia in 2000-01. His Test career ended following a beat-up at Melbourne, where he was hit by locals into unconsciousness. He made a brief comeback, but could really not get going. With a First-Class record of 166 wickets at 29.46, he will find a place as an opening bowler.

11. Thomas Rust: Rust made a solitary appearance for Gloucestershire — against Lancashire in 1914 — before World War I brought his career to an end. He seems to be the weakest link in the side (he scored 2 and 0, and did not bowl or keep wickets), but he had once bowled unchanged through an innings in a minor match, taking 7 wickets and bowling out Cheltenham for 142. Unfortunately, the match was not given First-Class status. India vs West Indies, ICC Cricket World Cup 2015 at Perth: Why this could be an exciting clash 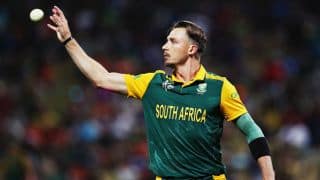 Never been more scared in my life, says Dale Steyn