Lots of captains and two specialist wicketkeepers. And a lot of Taylors.

Let me begin this with an anecdote. Mark Taylor was at Newcastle, playing for New South Wales against Tasmania, a few days ahead of the Sydney Test of the 1986-87 Ashes. He received a phone call from Channel 9: Look, if you get into the Australian team would you mind coming for an interview on the Today show?

This left Mark perplexed, but carried on with the match. There was another call once he returned to Sydney: This is the Today show. You re in the Test team. Can you come in?

Mark was not something on these lines, but he showered quickly anyway, preparing himself for the possible questions. Then the phone rang again.

Caller: Mark, is there a P Taylor who plays for New South Wales?

Caller: Has he played this year?

Taylor: Well, he played the last game against Tassie [Tasmania].

Caller: Could it be him that s picked?

Taylor: It quite possibly could be.

Caller: Will you still come in?

Taylor: No, I m not coming in.

Peter Taylor took 8 wickets on Test debut shortly afterwards. I told the story to cite how common Taylors are in the world: indeed, there were two Test probables in the same Test side at the same point.

Still do not agree with me? Fine. When they went out to toss in the Bulawayo Test of 2011, Brendan and Ross Taylor became the first Test captains to share a surname. Why not an XI, then?

There is little doubt over Mark s selection. He had 7,500 Test runs at over 43.49 with 19 hundreds (including a treble). His best series was the 1989 Ashes, where he scored 839; England would not have their hands on the urn in another 16 years. He batted for over 38 hours in that series.

He was also an excellent slip fielder. His 157 Test catches were a record for non-wicketkeepers when he retired, as was his 66 catches off Shane Warne.

Mark also helped shape the near-Invincibles that Steve Waugh inherited. If one denies that, he cannot help but agree that he infused the brand of aggressive cricket the Australians played in the new millennium.

It will not be an exaggeration to call Herbie South Africa s first cricket hero since Aubrey Faulkner. He scored almost 3,000 runs at over 40 despite (a) losing a chunk of his career to The Great War, and (b) playing his cricket almost entirely for a weak South African side. He mastered both turf and mat, and his duels against Syd Barnes in 1913-14 had earned legendary status (Arunabha Sengupta had written on one of them).

You may argue that Ross had failed in India and South Africa, but then, he had done wonderfully in Australia and Sri Lanka, and a decent job in England. And at home he has mastered everyone. Ross can explode without warning, preferring the zone between mid-wicket and square-leg, shredding the strongest bowling attack into ribbons. Ask Shoaib Akhtar. He is also the third Test captain in the line-up.

At the time of writing, Claire is the only woman to have scored 1,000 runs in Tests, 4,000 in ODIs, and 500 in T20Is. She retained healthy averages throughout (41, 40, and 28); all her 4 Test hundreds (the world record is 5) came against major nations; and after being shortlisted in the top three for ICC Women s Cricketer of the Year in consecutive years, she won it on the third attempt. She was also the first woman to be named a Wisden Cricketer of the Year. She also kept wickets, but as we will see, that will hardly be required.

Brendan s ordinary Test career can be attributed to Zimbabwe s sporadic appearances. There has been no such qualm in ODIs, where he became the fourth from his country to score 5,000 runs, and his 4 hundreds remain unmatched. Oh, and he can keep wickets as well but once again, there are multiple specialists in the side.

At the time of writing this, Sarah is the only female cricketer with 3,000 ODI runs, a batting average of 40, and a strike rate of 80. And if one considers only wicketkeeper-batters, there has been no real challenger in history (though Trisha Chetty has been doing a fantastic job of late). Also, how many people can play the on-drive better?

As for her glovework, just check YouTube. Despite the presence of a legend, Sarah will definitely share duties with the big gloves.

Bruce remains a favourite among quizmasters, for he is the only cricketer to score a hundred and take a five-wicket haul on Test debut. His batting career never took off (though he would later score a whirlwind 111-minute 124 against West Indies after walking out at 152 for 6). However, he thrived in every condition with ball, something most fast-medium bowlers have failed to achieve especially in the subcontinent. A haul of 111 Test wickets at 26.60 merits selection.

I have mentioned Peter s debut Test before. He was replaced by Shane Warne in the side, and rightly so, for his bowling average read a woeful 39.55. In ODIs, however, it was a different matter: his 97 wickets came at 28, and he went for 4.17 an over. It must be mentioned that Peter played three-quarters of his international cricket in Australia, where finger-spinners rarely thrive. He also averaged 27 with bat in Tests and 31 in First-Class cricket.

Bob was kept out by Alan Knott but a lot of that had to do with batting. He made up for that in domestic cricket: his 1,649 First-Class dismissals remain a world record. He played 57 Tests, only one of which came before he was 36. Even then he did a magnificent job, forging an excellent pair with Ian Botham. At one point Taylor also held the Test records for most dismissals in an innings (jointly) and a match. He was even called up at 45 to keep wickets for England on emergency…

Clare was the first Englishwoman to take a hundred ODI wickets. She held the record for England s highest wicket-taker till 2013. She played till 40, and made up for her limited Test opportunities with an excellent ODI average of 24. Opportunities were scarce, which meant that she had to play for Yorkshire in summers and Otago in winters.

She was a part of the 1993 World Cup-winning side in the same year when she played for Knowley United in FA Women s Premier League Cup. Not many have the distinction of playing finals at Lord s and Wembley in the same year. Of course, she also played in World Cup football, in 1990.

Jerome may not be as great as his predecessors, but he had some excellent spells. The greatest of this was 5 for 11 at Sabina Park in 2008-09, where he and Sulieman Benn wrecked England for 51. Few have been as successful at their home grounds: his 5 Tests at the ground till date have fetched him 29 wickets at 13.58.

He has not been successful overseas (in Tests; he has done reasonably well in ODIs including a hat-trick against Australia in India), but he is genuinely quick, can notch up serious pace, and even has a Test hundred.

As for the substitute fielder, there have been few better short-leg fielders in recent times than James Taylor. 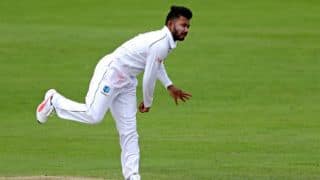