On February 6, 2010, Yusuf Pathan scored 210 in 190 balls to help West Zone chase down a mammoth 541 in the fourth innings – the highest score overhauled to win a First-Class game – in the Duleep Trophy final against South Zone. Yusuf’s blitz followed his first innings effort of 108 in 76 balls. Nishad Pai Vaidya remembers that massacre. On February 6, 2010, Yusuf Pathan scored 210 in 190 balls to help West Zone chase down a mammoth 541 in the fourth innings – the highest score overhauled to win a First-Class game – in the Duleep Trophy final against South Zone. Yusuf’s blitz followed his first innings effort of 108 in 76 balls. Nishad Pai Vaidya remembers that massacre.

Yusuf Pathan is one of the most thrilling batsmen and a natural entertainer on his day. His exploits in T20 cricket have made him a hero and the fans expect fireworks every time he walks out to the middle. However, his heroics in T20 cricket have often eclipsed his decent First-Class record and his feats in domestic cricket. Irrespective of the format or the stage, Pathan is the kind of a player who maintains the same belligerent approach. He lives by the sword and dies by it.

On February 6, 2010, Pathan took his T20 approach into a First-Class game and helped rewrite the record books. In the Duleep Trophy final of the 2009-10 season against South Zone, he put in a performance that defied logic. Playing for the West Zone, he stroked 210 in only 190 deliveries to chase down a mammoth 541 in the fourth innings – the highest score overhauled to win a First-Class game. The previous record was held by Sri Lankan side Central Province – who chased down 513 to beat the Southern Province.

One doesn’t see the big Indian stars too often in the domestic tournaments in India and the Duleep Trophy final in 2010 was no different. However, there were a few internationals on show in that game. West Zone’s India players included the Pathan brothers, Yusuf and Irfan, Ramesh Powar, Avishkar Salvi, Ravindra Jadeja and Wasim Jaffer, who was captaining the side. Dinesh Karthik was the only international player in the South Zone side and naturally the responsibility of leadership was on his shoulders.

South Zone won the toss and elected to bat at the Rajiv Gandhi International Stadium in Hyderabad. The wicket there has often produced run-fests and the decision was a no-brainer. Karthik led his side from the front with an attacking 183 off only 226 balls. That propelled South Zone to 400. If one felt that Karthik had put in a stellar show, Yusuf Pathan was waiting to bludgeon the bowling.

West Zone’s innings stuttered in pursuit of getting the first-innings lead. At 18 for two, Yusuf walked in with the pressure on him. Jaffer was going steady at one end, with Yusuf warming up for an assault. With his score on five, he reached 2000 runs in First-Class cricket. He then started expanding his areas of scoring with Jaffer holding on. However, West Zone kept slipping and Yusuf was the only one who held fort – not the precise term, though, as he kept hitting fours and sixes. They finished at 251 – Yusuf scoring 108 (off 76 balls).

The game was clearly in South Zone’s hands and Karthik wanted to extend that advantage. Intent on his task, he went on to score 150 in the second essay – to bring up his second hundred of the game. This time, runs flowed at a faster pace as he took only 162 deliveries. South Zone had set a target of 536 for the West with a little over three days to go. The fact that three innings were completed inside three days – with the amount of runs scored – shows how good the wicket was. Thus, 536 looked monumental, but not impossible to surmount.

With time on their hands, the West Zone top order patiently went about their task. The openers Chirag Pathak and Harshad Khadiwale, saw the end of day three at 50 for no loss. The charge continued the next day as Jaffer contributed with a gritty 66 and Pathak completed his century. Yusuf walked in at a relatively comfortable 239 for three. However, South Zone were still the favourites.

It didn’t take time for Yusuf to get into his elements as he smashed his eighth ball for a huge six over long-on. He had an early reprieve – dropped at long-on. To add insult to injury, the ball fell over the boundary. South Zone would live to repent that. However, through the carnage, they did manage to dismiss Jaffer and Jadeja in quick succession – something that did not affect Yusuf one bit.

With his brother on his side, Yusuf continued to toy with the bowlers. He brought up his fifty with a maximum over long on yet again. Aushik Srinivas – the South Zone left-arm spinner – bore the brunt of Yusuf’s fury as he was carted all over. It certainly wasn’t a memorable experience for the then 16-year old Srinivas as he was given some rough treatment. Luck wasn’t on his side as Yusuf was dropped twice off his bowling.

Irfan was dismissed with the score on 378 after contributing a quick-fire 42. At that stage, the game was very much in the balance as Yusuf was the big wicket under the circumstances. As the game headed into the fifth day, South Zone knew that Yusuf stood between them and victory.

Early on Day Five, Yusuf brought up his century with a boundary over point – his second of the game. Pinal Shah stood firm with a dodgy display. At the other end, Yusuf kept flaying the attack to keep West Zone in the hunt. South Zone kept spilling chances to allow the game slip from their grasp.

After Shah was dismissed, Powar gave great support to Yusuf.

It was almost as if it was a recursive script. South Zone kept dropping Yusuf and he continued hitting the ball over the park. With his score on 189, he smashed two consecutive sixes to bring up his double hundred. And when one run was required for a victory, he appropriately signed off with a six to end the game. The most remarkable run-chase in Indian domestic cricket was complete as Yusuf had done the unthinkable – with a lot of help from the South Zone fielders – who dropped him five times.

Reflecting on his knock, Yusuf told ESPNcricinfo, “It was without a doubt the best innings of my career, and hopefully a major turning point for me.” A few days down the line, he was recalled to the Indian One-Day International (ODI) side. 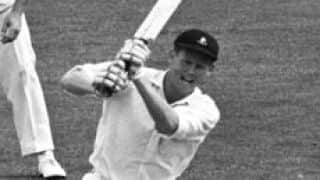 Graeme Pollock’s 274 and his extravaganza with Barry Richards