Raising concerns about Pakistan's domestic cricket, former Test opener Aamer Sohail has said that it is in a state of disarray.

In his latest blog for PakPassion.net, Aamer Sohail writes about the alarming state of disorganisation in Pakistan domestic cricket, why bad pitches are contributing to a lack of good quality batsmen, concerns about Fakhar Zaman’s decline in form, the smog controversy in the series between India and Sri Lanka and why he feels that Virat Kohli has already attained legendary status.

Pakistan domestic cricket is in a state of disarray

The manner in which Pakistan domestic cricket is currently organised and run reeks of inefficiency and disorganisation. To me, Pakistan domestic cricket is in a state of disarray. For the past 4-5 years, the emphasis of the Pakistan Cricket Board is on anything but domestic cricket and things have got worse now with the Pakistan Super League in the mix. Domestic cricket is a nursery for growing good cricketers, but we are paying scant regard to its development. There seems to be no direction and agreement on how to run cricket in our country. The structure of domestic cricket is perpetually being tinkered with and there is general confusion about how to organise it. It undergoes a change every year or so and there is no sense of continuity in how things are run. The very simple fact of the matter is that unless you concentrate on making the domestic structure better, your cricket and cricketers will never progress. I am also shocked and disheartened by rumours that the Quaid-e-Azam Trophy could be scrapped in the future as to me that will represent the single most idiotic step ever taken and I pray that it will never happen, as this shows that some people have absolutely no idea or simply don t care about Pakistan cricket.

Ad-hoc scheduling of our domestic tournaments

Once again, the ineptitude of the administration comes to the fore when we talk about the scheduling of our domestic cricket. I for one, have no objections to our players playing in leagues and tournaments around the world. What I would have liked to see is that the PCB planning their domestic schedules one year in advance. In that way, if a player had been approached by BPL or any other league, he would have looked at the schedule and said, yes or no depending on what was arranged by the PCB. It would have been clear to the player about his commitments next year and he would have taken the appropriate call on signing up for a foreign league. But that is not the case now and the players end up committing to other leagues in the absence of any concrete information about Pakistan s domestic cricket schedule for the next season. Look at what happened during the time the Caribbean Premier League was being held. Our players were called back on the pretext of a domestic tournament being held in Pakistan and then that was postponed, leaving them in limbo. No other word, other than ineptitude comes to my mind to describe this situation, as it is clear that future planning is a concept which is alien to the PCB.

Poor batsmen are a by-product of low quality domestic pitches

The biggest tragedy afflicting our cricket at the moment is that our board is not spending money on aspects of our domestic game where it is needed most. If you are wondering why India produces such high-quality batsmen, then look no further than the provision of good and true pitches. In my view, if a batsman does not get a chance to bat for longer periods then he will never develop the confidence and skills needed to play those long innings. The batsman s talent will only flourish and his game improve if is he is able to play on good quality pitches. If the batsman, as is the case in Pakistan, spends most of his time on the pitch trying to survive with just defence, then he is likely to turn out to be a poor-quality player. Poor international batsmen, in my view, are a by-product of low quality domestic pitches.

Pakistan pitches of today lack consistency as they did in yesteryear

In our playing days, each pitch we played had a unique and distinct character. For example, The Gaddafi Stadium was known for its slow pitch, Karachi had a turning track, Pindi stadium had a lot of grass on the pitch and the Gujranwala pitch was expected to be pacy and with a lot of bounce on it and so on. So, a batsman had a chance to hone his skills on different and contrasting surfaces. Today, we see that every other pitch is bowler friendly and the batsmen have no option but to try and survive in whatever way they can. And the proof of that is in the fact that for a long time, we are yet to see a quality batsman come through the ranks of our domestic players. In my view, the few decent batsmen apart from the likes of Younis Khan and Misbah-ul-Haq that Pakistan has produced in recent times are Asim Kamal, Salman Butt and more recently, Asad Shafiq. Apart from that I see no real high-class batsmen in our ranks and the reason for that is the quality of our pitches. Pakistan’s batting is indeed in a state of crisis as we have had to depend on batsmen who in some cases had clearly exceeded their shelf-life simply because we didn’t have replacements for them.

Inability to select the right batsmen for role as openers

The opener s slot for any decent side in the world is a very important position in the team. The player who needs to take that slot needs to be the most technically accomplished batsman for the team. In our case, we seem to put players with severe technical deficiencies in the opening position and then expect miracles of them. And then there is the case of unfair treatment for some players who were actually qualified for this job. The case of Taufeeq Umar is well known in this regard. To my eyes, he was the most talented and gifted opener, but we wasted him and discarded him. We, unfortunately, are great in destroying good players but are unable to develop good ones. Therein lies our problem. We are unable to select the right players for the right job and if, by some fluke we do, then we have no way to develop him into a better player.

Fakhar Zaman has been found out

It is a little sad to note that for all the success that Fakhar Zaman experienced at the Champions Trophy in the summer, he has been unable to repeat that in subsequent games. The reason for that is rather simple and that is the fact that during the Champions Trophy, not many sides knew much about Fakhar. He was new and a surprise package for many opposing teams. Since then, the other teams have worked him out and come up with ways to neutralise his threat. In my opinion, it is his back-lift and how he crouches before deliveries is where all his problems stem from. Regardless of what the actual issue is, the shocking aspect of all this is that despite having an army of coaches, no one has been able to help Fakhar resolve his problems. These coaches are incapable of helping a struggling batsman to improve his technique by giving him the right kind of information. Although there seems to be no dearth of unnecessary information provided to the player which only confuses the batsman without any obvious benefit. Without precise information, a player will continue to struggle and Fakhar is a good example of that failing.

The match officials should have acted decisively in the smog controversy

What transpired at the Feroz Shah Kotla ground during the 3rd Test between India and Sri Lanka is a rather unique situation for an international game. But, I cannot see anything wrong in the behaviour of either of the Indian or Sri Lankan teams. They both acted according to their own interests and understanding of the situation. What really puzzles me is the indecision of the umpires and match officials in this whole episode. It is they who should have made the determination about the suitability of conditions and then both teams would have been forced to comply with that decision. If the match officials, based upon advice from competent authorities, thought that the climate and atmospheric conditions were dangerous for play then they should have come forward with their decision. As far as the fact that a match was being played under such conditions is concerned, we all remember when schools were shut down in Delhi due to smog and a similar thing happened in Lahore as well some time ago. But this time around, this was not the case in Delhi and if normal life is going on as normal outside the stadium then play inside the ground should also not be affected.

Virat Kohli is simply doing justice to his immense talent

To me talk of Virat Kohli as a future legend is bit silly as I believe that he has reached legendary status already. We all knew that he had talent but what makes him special is that he has translated that talent to greatness on the field of play. His passion for cricket is remarkable and yes, in the early days he had some arrogance and attitude issues, but he is over them now and he is now focused only on playing cricket. He clearly understands what is required of him as a team captain and a player. He is simply doing justice to his immense talent and this not an easy thing for many cricketers to do. In terms of specific abilities, I would point out the fact that his defensive technique is excellent and rock-solid. He is the sort of a batsman who does not need a bad delivery to score runs. He can pick his runs from good deliveries and can manoeuvre the ball to any part of the ground and rarely lets the bowler call the shots in any situation.

(This article was first published on PakPassion.net) 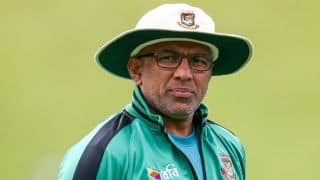