Aamir Sohail: "Kamran Akmal should have been in Pakistan's World T20 squad"

Aamir Sohail: "Kamran Akmal should have been in Pakistan's World T20 squad"

Aamir Sohail emphasises on Pakistan's selections for the ICC World T20 2016 and questions the decision to not include specialist spinners as well as Kamran Akmal's exclusion.

Writing in his latest exclusive blog for PakPassion.net, the former Pakistan captain Aamir Sohail expresses his concerns about composition of the Pakistan World T20 squad and questions policies behind player selection for the PSL.

Pakistan World T20 squad lacks specialist spinners. I have to admit that like many others who have commented about this. I am mystified by the lack of quality spinners. In normal circumstances, the spinners in the T20I squads are selected on how successful a bowler is in terms of taking wickets and also his economy rate is taken into consideration. It goes without saying that when you play in India the spinners will be handy.But the issue here is that without regular specialist spinners and a pace heavy attack, the pressure to take wickets will inevitably fall on Shahid Afridi.

It is true that on spinning tracks, even bowlers like me, will end up with a bag full of wickets, but what happens when the pitch has no turn? How well can the non-regular spinners bowl? That is a major concern and something one can only hope that the selectors and the captain have given serious thought to.

Having bits and pieces cricketers is not the way forward!

So it appears that the selectors opted for bowlers who can bat a bit when deciding on which spinners to take to the World T20. Whilst on the face of it, the attempt to include what appear to be all-rounders could be regarded as a sane strategy, the practicalities of the application of this approach tell a different story.

Experience tells us that an all-rounder is a player who can hold his position in the team based upon his bowling or batting alone. So if you pick a player who can give you 100% uplift in at least one area for instance in bowling, then his batting capabilities are a big plus for the team. On the contrary, if you don’t have a match-winner in either aspect of the game and take a bits and pieces type cricketer into a major tournament like the World T20, then all you get is a headache. This is the plain truth of the matter and whilst I do wish Mohammad Nawaz well in this tournament, I once again do not see the logic of not including a specialist in the spinner category.

What does Khurram Manzoor’s selection say about the PSL?

It is no secret that I have been very critical of Ahmed Shehzad in the past as he hasn’t been making runs when it mattered but I am afraid, when it comes to him being dropped for Khurram Manzoor one has to wonder what is actually going on! Khurram’s selection not only demonstrates the lack of a coherent thought process by the selectors, but also raises some important questions about what the PSL is about as it appears that some really good talent is not being picked for Pakistan’s premier Twenty20 tournament.

And before you jump in and tell me that PSL selection decisions are orientated towards the commercial interests of the franchise owners then let me say that as far as I know, the objective behind this tournament was to develop capable players with the ultimate goal of benefitting the Pakistan team.

After Saeed Ajmal and Yasir Shah we have no quality spinner or match winner but what other specialist spinners have come forward in this tournament who can take this forward for Pakistan? We should have introduced more young batsmen in PSL, because let’s face it, we do not have any quality batsmen after Misbah-ul-Haq and Younis Khan leave the stage. I am convinced that after these two players retire, even our Test team will become like our One-day team.

The more I look at this, I am convinced that the selection process to pick Pakistan players for the PSL fraught with inconsistencies. We would like to emulate the IPL in terms of the hype but we seem to be missing out essential strategies that have lead to the emergence of talented match-winning players from IPL. There is no real secret or magic behind that. All that happened in the IPL was that proper youngsters like Ravindra Jadeja were given a chance to shine and they succeeded.

I may sound like a broken record at times but the problem with our board is they’re not good enough when it comes to technical and for that matter commercial issues as well. I mean, look at the pitches in the PSL; Who in their right mind will come to T20 matches to see bowlers dominate? People come to see fours and sixes as that is what raises the popularity of these games. Why, then did they make such wickets where at one point even a score of hundred was looking doubtful? Any organisation in any sphere of life, needs to have proper planning from top to bottom. In the case of a cricket board, even a groundsman needs to know what they’re doing and what is expected of them.

Iftikhar Ahmed’s selection for the WT20 squad, another example of the malaise in our cricketing affairs

Let me take you back to the time when I resigned as the Director of the National Cricket Academy. At that point, I presented the board with a list of between 30 and 35 players who in my view, could be nurtured into becoming quality players in the future. I told them that we need someone who could make quality players out of this group. Unfortunately, nothing came of my recommendation.

Fact is that unless you include the proper people in our cricket administration, our cricket will continue to suffer. Iftikhar Ahmed’s surprise selection is a good example of this flawed approach. By way of example, look at how Cricket Australia transformed the fortunes of Usman Khawaja, Matthew Hayden and Justin Langer. All they did was to look at weaknesses in the techniques of these players after their initial international appearances and initial setbacks. They then worked on them so that next time at the top level those players did not fail. Do we have any process like that in our cricket setup? If they did, then a talented batsman like Umar Amin would have been up there with the top players; the same goes for how we have handled the case of Umar Akmal.

Quite simply put, if Kamran Akmal is performing well in domestic cricket then why has he not been selected for the World T20 squad? Kamran Akmal should have been in Pakistan’s World T20 squad. If you can play Mohammad Amir despite his past, then why not allow Kamran Akmal back even if there are some doubts about his commitment? If he is performing well on the domestic scene then at the least give an explanation as to why he’s not being selected. If you can play Mohammad Rizwan as a batsman, then you can play Kamran Akmal as one too. While we are on that subject, why was Mohammad Rizwan dropped in the first place? If he had issues with his batting, then exactly what use are the support staff? Why did they not work on his weaknesses after every series? It appears that everyone is contributing to the destruction and the downfall of our cricket.

I was part of the commentary team for this tournament but let me tell you that I was also asked to play in it. At that point, I asked myself two questions. Can I give my 100% and do I have the fitness levels to give my 100%? The answer, sadly was no and I declined the offer. I have heard from many people that the MCL is “Mickey Mouse” cricket league with no real intensity. It has, however, proved otherwise. It’s great to see these players still raising the intensity of the game and giving their full 100%. And I think the fans have bought into this type of idea and this type of league and the cricket has been fabulous. ICC World T20 2016: Kolkata Knight Riders back Sunil Narine after decision to pull out of tournament 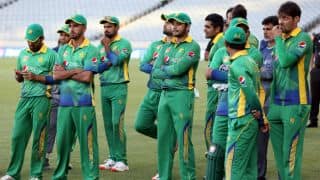