Aamir Sohail : "Nothing in Ahmed Shehzad's game apart from a series of ugly cross-batted hoicks"

Aamir Sohail : "Nothing in Ahmed Shehzad's game apart from a series of ugly cross-batted hoicks"

Writing in his exclusive blog for PakPassion.net, the former Pakistan captain Aamir Sohail looks at the state of Pakistan’s preparations for the upcoming World T20 tournament and wonders why such little emphasis is placed on skills and techniques of batsmen and suggests that like Mohammad Amir, both Salman Butt and Mohammad Asif stand a good chance to make international comebacks for Pakistan.

Let me start with a brief analysis of the ongoing T20I series between New Zealand and Pakistan. The outcomes and lessons learnt from it will be vital takeaways for both teams as they look ahead to the upcoming World T20 in India.

If you see how New Zealand have approached these games, it would appear that they are challenging themselves by bowling first and using two spinners. Pakistan were able to thwart that plan in the first game when it came to bowling as their spinners took some early wickets but in the second game the visitors were badly exposed and it would appear that New Zealand have the momentum going into the third and final game.
Pakistan’s preparations for the ICC World T20

As we look towards the World Cup, one can see that Pakistan does have some dangerous although not entirely reliable, players who could turn the game to their advantage if they get one or two good overs. After all, Twenty20 is like that and a few good hits or even mis-hits or wild swings of the bat can change the course of the game. In that list of players, I would mention the likes of Shahid Afridi and Shoaib Malik and also Umar Akmal. Whilst these players may be dangerous once or twice, World Cups can only be won by reliable players who can consistently score and I am afraid we are lacking in that department and this has been the case for a long time.

To me the main problem is that whenever a tour finishes, we do not evaluate or rate the players in terms of their skills or technique. All of that is brushed under the carpet without a question being asked. We then hold “training” camps with a lot of fanfare before start of the next tour and all we hear from that camps is about how the fitness of the players are being addressed and improved.

There is hardly any mention of any improvement in a player’s skills or technique as a result of work done in these camps. It appears that the sole issue with Pakistan players is their fitness. Are we preparing cricketers for the next series or are we training wrestlers?

If you are a skilled batsman and are feeling tired after scoring sixty runs with a good technique, then one can understand that you need to improve fitness or if you are bowler who is struggling after bowling ten wicket taking overs then one can see how you need to work on your physical aspect. When you have none of those skills but are blindly working away on fitness then the whole competence of the think tank comes into question! Sadly, I have yet to see any improvement in skills or techniques as a result of these camps and that does not augur well for Pakistan’s chances in any major competition.
The Ahmed Shehzad and Sohaib Maqsood conundrum

The continued failure to perform by Ahmed Shehzad and Sohaib Maqsood points more to lack of failure to develop alternatives than actual issues with the two batsmen. For example, is there a second or back-up regular opener who can replace Ahmed Shehzad? In other words, there is no pressure on Shehzad – or for that matter on Sohaib Maqsood as well. They both know that if they play a bad stroke or fall cheaply, they may be dropped for one game or series but they will be back again without making any effort to improve their skills or rectifying their problems. They know that they are indispensable and if that is the case, why would they work hard to fix their issues? This is a cultural issue with Pakistan cricket.

If you analyse Ahmed Shehzad’s batting style, you see nothing in his game apart from a series of ugly cross-batted hoicks which can only get you so far. Contrast that with the way Kane Williamson batted the other day, he relied heavily on singles to keep his momentum going. The fact is that singles are key factors in building an innings in T20 cricket. If you can hit the ball out of the park that is well and good but you cannot do that on every ball. However, playing a dot delivery is a crime in this format of the game. A good T20 player has to be able to score at a run a ball and that is a minimum of 120 runs for the taking; add a few boundaries on top and you are looking at 170+ type scores with ease. This is something lost on these batsmen which is a cause of worry for Pakistan
Mohammad Amir’s return to the international arena

Mohammad Amir has now made his international comeback and what he needs to do now is to buckle down and work very hard. His bowling speed was reasonable but if he wants to be an imposing figure in international cricket then he definitely needs to work on swinging the ball and also not panic in front of good batsmen as he did the other day when he forgot to ball bouncers which should have been his surprise weapon. Having said that, Amir needs to be given some time to find his feet in international cricket again and we should refrain from judging him too early.
Salman Butt and Mohammad Asif deserve a chance to shine as well

Salman Butt and Mohammad Asif are also back in the fray. For those wondering if the two can also be afforded the same sort of chances as Mohammad Amir, the answer is simple. You cannot have two sets of rules for players when it comes to allowing them back into the national squad.

Realistically speaking, Pakistan does not have decent opening batsmen. We do not have a line of opening batsmen in all three formats of the game who are comfortable with the demands of international cricket which is being played at an aggressive pace. In that sense, you need to have players who are regular openers and not makeshift ones. Salman Butt, thus, has a very good chance and he deserves a chance to make a comeback too. And while we speak of Salman Butt, what of Mohammad Asif? If we recall, Asif’s main strength was the ability to swing the ball and pick wickets in that way. He never had a lot of pace and frankly speaking, his style of bowling does not require extreme speed. What remains to be seen is whether he is still effective in the swing and seam department or not. He is not express pace but remember, neither Jimmy Anderson nor Stuart Broad are known for express deliveries so Mohammad Asif may well have a lot to offer to Pakistan cricket and should not be ignored. 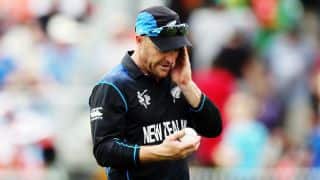 Corruption continues to haunt cricket and other sports