On October 25, 1991, Aaqib Javed bowled Pakistan to victory in the triangular Wills Trophy (the other team being West Indies) over India with figures of seven for 37, inclusive of a hat-trick. Karthik Parimal looks back at that eventful spell. 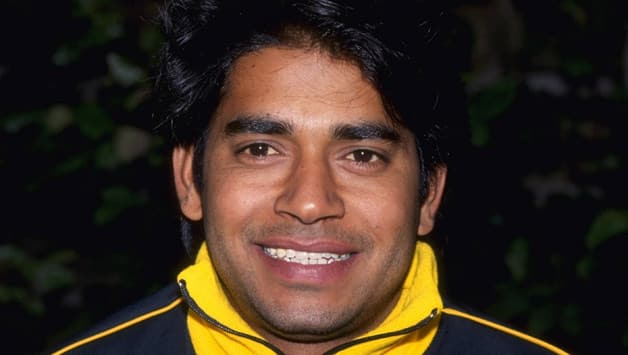 On October 25, 1991, Aaqib Javed bowled Pakistan to victory in the triangular Wills Trophy (the other team being West Indies) over India with figures of seven for 37, inclusive of a hat-trick. Karthik Parimal looks back at that eventful spell.

It was at the age of 13 that Aaqib Javed turned to representative cricket, although his childhood was spent hurling taped tennis balls in the backyard. Until 1986, he’d hardly dreamt of representing Pakistan, but two years later he was flown to New Zealand and featured in a bowling line-up that consisted of Imran Khan and Saleem Jaffar. Wasim Akram and Waqar Younis, too, were his contemporaries, and amidst cut-throat competition, he thrived in those green flannels. Four years into his international career came the red-letter day for Javed, at Sharjah, where he bulldozed the Indian batting line-up with the best spell of his life.
Lead-up to the spell

Mohammad Azharuddin, the Indian captain, won the toss and chose to field first on what appeared to be a flat deck. His decision proved to be a good one, albeit momentarily, when Aamer Sohail and Sajid Ali, the Pakistani openers, succumbed for just 23 runs. Then, Zahid Fazal and the wristy Saleem Malik occupied the crease for what must have seemed like eternity to the Indian bowlers. The duo racked up runs at will as the fielders’ shoulders dropped. The bowlers’ attempt to arrest the leak of runs rendered futile and, on 98 (eight fours, one six), Fazal retired hurt owing to muscle cramp — the only way he looked like getting off the field on that day.

The partnership between Fazal and Malik was worth 180 runs. Malik eventually holed out for 87 (six fours, one six), and Manoj Prabhakar and Kapil Dev finished with three wickets apiece, but 29 extras bolstered Pakistan’s total to a potentially match-winning 262 for six. While pundits felt the unwanted extras could play a pivotal role in the final overs of the Indian innings, little did they predict what was to follow; a steamroller was on its way.
A momentous feat

India had unorthodoxy in the form of Ravi Shastri and Navjot Singh Sidhu at the top of the order, followed by technically adept Sanjay Manjrekar and Azharuddin. The middle-order was propped by the presence of raw talent in the form of Sachin Tendulkar and Vinod Kambli and Kapil Dev’s experience was always going to be invaluable. These seven batsmen looked capable of getting close to, or even overtaking, Pakistan’s daunting total. However, once the Indian innings got underway, there was no questioning which team would usurp the Wills Trophy, thanks primarily to the brilliance of one man.

Wasim Akram and Imran Khan opened the bowling for Pakistan, and the Indian batsmen safely negotiated the danger posed by the duo. The ball was then tossed to Javed in the ninth over, a move that proved to be the turning point of the match. He initiated a collapse, having Sidhu poke at an out-swinger and caught by wicket-keeper Moin Khan for just 32 runs on the board. Thereafter, India descended down a slippery slope. Commotion ensued, fatally for the batsmen, in Javed’s third over. A feat that would vividly be remembered, decades after its occurrence, was etched by the speedster from Sheikhupura.

With a haughty gait, typical of a fast bowler, and a white headband that looked as pristine as his flannels, Javed stormed the bowling crease with the red cherry in his hand. Shastri was the first to be dismissed leg before wicket (lbw) after being struck on the pads while looking to play across the line. A ball later, Indian captain Azharuddin committed the same gaffe and was on his way back to the hut. In came an 18-year-old by the name of Sachin Tendulkar and, with the score on 47 for three and the crowd deliriously backing Javed to go for three-in-a-row, he took guard. Javed galloped towards him in characteristic manner and pitched it in exactly the same spot as on the previous two occasions. Incidentally, Tendulkar attempted the same shot as his predecessors and copped the ball on his pads, too. A raucous appeal followed and the umpire was quick to raise his finger. Javed took off running as his ecstatic team-mates engulfed him before catching in on his celebrations. The crowd’s joy knew no bounds. India had slumped to 47 for four and Javed bagged a hat-trick, the seventh bowler to do so in limited-overs internationals.

Kambli and Manjrekar then led India to the process of recuperation with a 53-run stand, but the former was run out and Kapil Dev soon followed, bowled by an unforgiving yorker from Javed.  At 129 for six, the Indians were staring down the barrel. Manjrekar then thwacked a short and wide delivery straight into the hands of Waqar Younis fielding at the third man position. Another short delivery ensued, and Manoj Prabhakar pulled this towards deep square-leg, only to be caught by a composed Aamer Sohail. Javed bagged figures of seven for 37 — the best in One-Day International (ODI) cricket at the time — and the Indians were reeling at 143 for eight.

Kiran More, India’s wicket-keeper, batting at No. 9, and Javagal Srinath, offered resistance, albeit not for long. They were bowled out for 190, conceding defeat by a mammoth margin of 72 runs. Javed’s figures of 10-1-37-7 were best in limited-overs cricket for almost nine years before Muttiah Muralitharan caught up, with seven wickets for 30 runs, at the same venue. In 2001, Waqar Younis snatched the national record away, registering figures of seven for 36, before Shahid Afridi (seven for 12) usurped it against the West Indies in the July of 2013.